The Right Stuff - Part One

I'm sometimes asked about sweaters I've knit in the past.  I can't remember a time that I didn't knit, so there are many.  Recently, Brandy, one of the Friday night knitting group that meets at A Knitted Peace asked me about some sweaters that I knit somewhere between 1990 and 1992, when my daughter was about 12 or so.  We were living in Germany at the time and bands like New Kids On The Block were huge with the teen set.  However, there were no fan t-shirts to be found anywhere, so I decided to knit sweaters.  I made one for my daughter, then her friends, and word-of-mouth spread and the next thing you know I'd knit over a hundred of them, selling all but about 6 of them.  At the time, oversized sweaters were all the rage, so these are about an adult size medium.

The background yarn is a DK weight from Phildar and I made many, many trips across the border to Strasbourg, France to buy bags and bags of it.  I know, I have your sympathy!!  I can't remember what the neon yarn is, but it's likely from Phildar as well.  The kids loved the bright colors.  I made a couple of sweaters on a white background, but the black ones were, by far, the most popular. 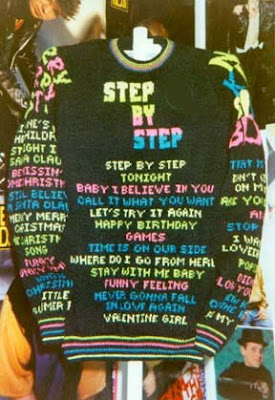 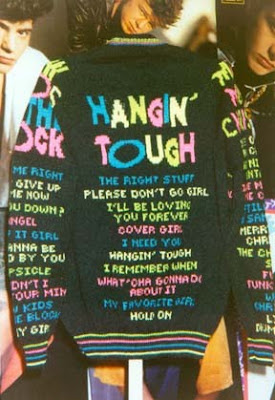 Yesterday I made a business trip to Cheyenne, Wyoming.  I had never been there before, so I really looked forward to seeing the town.  It was fun for another reason, too.  When I was a kid I would watch old westerns and I thought that places like Cheyenne, Virginia City, Dodge City and Laramie were fictional.  Imagine my surprise when I moved to Colorado and found out that they were real, and not too far away.  What did I know?  I grew up in Canada at the other end of North America.

After I took care of business stuff, I went for a short drive around town.  There were sculptures of big, colorful cowboy boots on the downtown street corners.  I didn't get a picture as there was construction going on and no good parking spots.  I'll take pictures next time, and yes, I'd like to go back again.  I thought they were charming and fit in with the genuine cowboy atmosphere.  I saw lots of people wearing cowboy hats and boots. 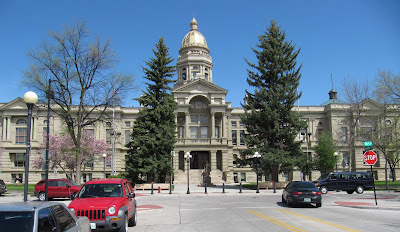 I was in the area of the Capitol Building, so stopped and took a picture.  The gold dome doesn't shine much in this picture, but it was bright and beautiful.
Well, you know, a knitter can't go to a new city and not check to see if there is a yarn store.  As it turns out there were a couple of them that were nearby.  I decided to go to Ewe Count and I wasn't disappointed. 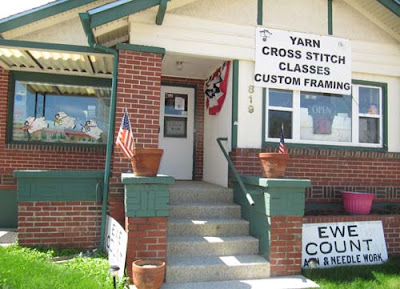 What I found was a very welcoming shop which is a knitter's paradise.  It was full of everything you might need, and lots of tempting items that you didn't know you needed until you saw them! 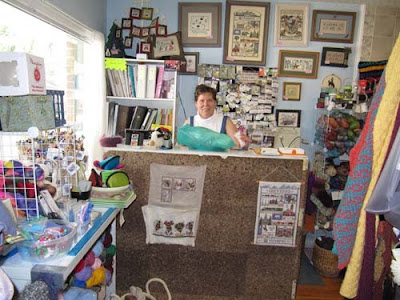 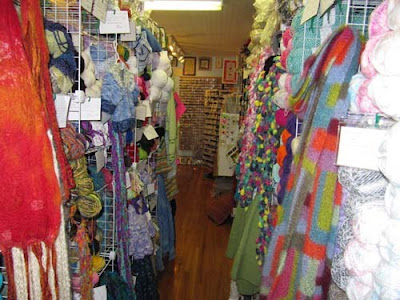 There is also a room for people who do needlepoint and cross stitch.

Whenever I travel I always try to find a ball of yarn that reminds of that particular trip and then I'll knit another block onto my Travel Afghan.  More on that project another time.  Which reminds me, I'm a block/trip behind.  What I found was a skein of beautiful undyed 100% mountain merino wool made in Buffalo, Wyoming.  It's from the Camino & Sons KID Ranch, Johnson County, Wyoming.  Someday I'll have to go back and pick up enough to make a sweater. I would have liked to spend more time in Cheyenne, but I had to get back to Denver and with the long weekend about to start I knew that traffic would be heavy.  There was another yarn store that wasn't too far away:  Prairie Wind Fiber Arts and Beads.  I'll save that shop for my next trip.
2 comments:
Labels: Afghans, Travel

I am Bohus knitting.

I'm just taking a break for a few minutes from working on my Bohus sweater.  Have you ever made something that you liked so much that you wanted to do it over and over again in every possible pattern and colorway?  It's early in the knitting, but I think that the Bohus is going to be like that for me.  I look at the pictures on websites, blogs, Flickr, Ravelry, in books such as Poems in Color and the DVD from Schoolhouse Press (excellent, by the way) and so many of them are tempting.  It was hard to choose the one that I did, the Large Lace Collar pullover.  I'm into the fun part, the colorwork.  Let's see if I'm still in love with this sweater once I get to the endless rows of black knitting.

At the suggestion of my friend, Sheila, we started a knitalong/support group that meets at the library at the Streets of Southglenn, Room "A", the first Monday of each month.  We have the room from 5pm until closing time, although we usually only stay until about 7:30.  If you're in the area and you're working on a Bohus, come and join us.  We'd love to have you.

I'll post a picture of my Bohus-in-progress soon, probably on the weekend, but for now, here is a little video that I found.  It's describing an exhibit that ran from late January to the end of March last year.  It was presented by the American Swedish Institute in Minneapolis, MN and called "Radiant Knits:  The Bohus Tradition." You can order the small booklet that was available at the exhibit through Schoolhouse Press.

Enjoy the video.  I'm off to knit another row or two before I call it a day.

Most days, if one particularly good thing happens, you say it's a good day.  Two?  A really good day.  Today, four bits of goodness happened.  Two of them came in the mail.
... 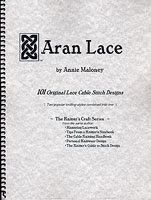 First up is a new book from one of my favorite knitting authors, Annie Maloney.  This time she is delving into the world of Aran Lace.  I like serious knitting books that teach me and expand my boundaries.  Sure, I'll buy a book of patterns, but that is happening less and less.

The first part of the book is like a workshop or textbook with chapters on techniques, project planning and garment design.  After that there is a collection of stitch patterns.  I would love to make many of them into sweaters.  Then, at the end are knitting projects.  All in all, a very good book and I can't wait to spend some quality time reading through it on the weekend. 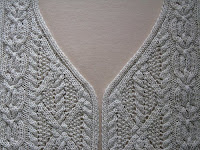 One particular design that really caught my eye is this one on the left.  I saw it on Annie's Ravelry group before the book came out and if the pattern were available, I'd be tempted to start casting on this evening.  I'm going to print out this picture, large and in color, as the one in the book is rather dark and it's in black and white.  I'm going to allow it to tempt me over and over.  I can definitely see this aran sweater in my future, as soon as I get some other projects finished up, that is.  Make the picture bigger and look at that detail.

Annie has other wonderful books, too:  Mastering Lacework, Tips From a Knitter's Notebook, The Cable Knitting Handbook, Personal Knitwear Design and The Knitter's Guide to Stitch Design.  I haven't been disappointed with any of them.  I bought my books here.
So, that takes care of knitting.  Next up, I got my copy of the limited edition extended play CD, "Already Live".  Despite the fact that I'm dying to rip it open and listen now, I'm going to exercise great restraint and leave it in its plastic wrap until early August.  Now, that's willpower.  They have another CD coming out next month, a new one.  I'll save that one for August as well.  That's when I'll be driving from Denver to Kingston, Ontario (via the Kitchener Blues Festival), a trip of 1700 miles or more, each way.  It'll be nice to have some new music to listen to.
... 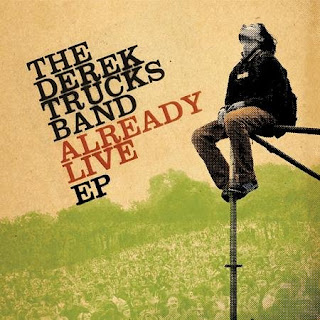 I heard the third good thing on the sports news tonight.  Colorado Avalanche defenseman, Adam Foote, will be back for another year.  He may be turning 39 this summer, but he's not too old. ...
I saved the very best for last:  all the nice emails I've received, welcoming me back to blogging.  You guys are the best.  Thank you so much.  I'm really enjoying reading the contest entries, so many different thoughts.  I'm glad that I'm choosing the winner at random as it would be impossible to choose based on what you've written.

Okay, the finale of Dancing With the Stars is on and it makes for excellent knitting time.
No comments:
Labels: Hockey, Knitting Books/Magazines, Music

It's funny.  I needed a break from blogging after writing posts for seven years.  However, after a week or two, I was missing it.  I took the two months to work on the look of the blog.  I was totally bored with the old blue banner, so I played with Photoshop and came up with something that is more "me".  I also like the white pages and plan to let pictures dress them up and add color.

Another change is the addition of a page showing what I've finished.  The link is on the sidebar.  So far I've added the three things I knit for my grandson, Braydon.  As soon as I get it blocked, I'll post the qiviut scarf I've recently finished.  I'm hoping to add a number of completed projects as my goal this year is to finish, Finish, FINISH.

To welcome you back to my blog and thank you for visiting, I'm having a little giveaway.  Socks are hugely popular and one of the most popular sock yarns is Socks That Rock.  You'll get 5 skeins (left to right): "Bella Coola" mediumweight; "Flower Power" lightweight; "Fire On The Mountain" lightweight; "Firebird" lightweight; and another mediumweight that is missing the label.  Some are from the STR Sock Club from a few years ago. 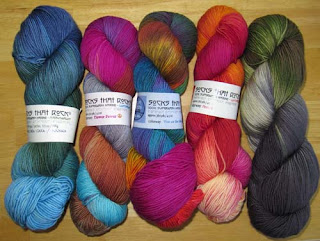 I haven't figured out, yet, how to add the requirement that you add your email address (which wouldn't be published) when you comment, so you'll have to check back to see if you've won and to claim your prize.  The winner will be chosen at random and announced on Monday, May 31st.  Good luck.

How would I finish that sentence?  "I would like to be the Eric Clapton of knitting".
28 comments:
Labels: Miscellany
Newer Posts Older Posts Home
Subscribe to: Posts (Atom)