One Step Forward, Two + Steps Back

I've made a few false starts with my Large Lace Collar Bohus:
(1) Cast on the required number of stitches and worked about 3/4 of the neck ribbing.
(2) Thought that the neckband would be too small, ripped it out and started again with 184 stitches.
(3) Worked about half the ribbing and decided that I had been correct with the first attempt and started over, as in (1).

Then, onto the body:
(A) Worked 30 rows of the colorwork and thought that my stranding was too tight and that the sweater was puckering.
(B) Ripped it out and started again, being very, very careful to keep the stranding loose.
(C) Found that the colorwork looked the same, so my stranding had been fine all along.  Continued to work and saw that the stranding was not puckering.  Any parts that I thought were too tight were actually the result of the knit and purl stitches which were resulting in a loose ribbed design.  The more rows I did, the better it looked.

Other obstacles along the way:
(i) Doing the colorwork with 24" Addi lace circulars.  When I got to more than 300 stitches I wanted to move to the 32" circulars.  Couldn't find them.
(ii) Got out my Knit Picks wooden needles which can't compare to the Addis, but they were the right length.  Moved the stitches to the wooden ne,edles, worked 30 to 40 stitches and the cord separated from the needle.  Had to pick up some teeny tiny stitches.  Succeeded.  This isn't my first problem with the Knit Picks needles separating.  The company has always been very good about replacing the faulty needles, but I feel that I've asked too many times.  I'm temped to part with them all, once and for all to avoid future irritation.  Since then I bought new 32" Addis.


Then the colorwork was almost finished.  Rows 60 out of 69 were done, but I didn't like one of the sections, so tonight I ripped back.  Matilda is being my spokesmodel so you can see how much is now on the needles. 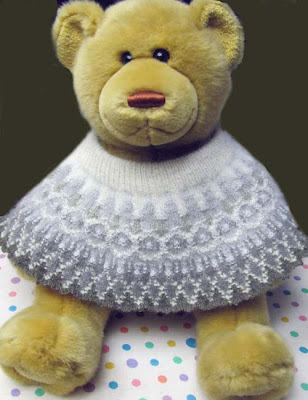 Now I'm having a bit of a dilemma.  I checked out Ravelry to see other's versions of this sweater.  I saw a beautiful neck ribbing here, on surly's projects (sorry, you have to be a member of Ravelry to see this site...it's free to join).  While I don't want to copy the neckband, I'm thinking of ripping back and doing something other than 1x1 ribbing.  I'll set the sweater aside for a day or two and think about it.  I don't mind reknitting if it means that I'm happy with the finished sweater.

Now, no laughing at how funny Matilda looks wearing just a yoke, even though she does look comical !!!
Labels: Bohus

Wow, you have a LOT of patience -- I'm not sure I could have done all that and still be sane. I think I'd let the bear have the collar as a shawl and start over rather than rip out all that lovely work so far.

I think the 1X1 ribbing you have is perfect for this sweater, but maybe that's just me. I would leave it as is. Either way, this is gorgeous.

I really like the 1x1 rib you have better. The other takes away from the Bohus patterning. Just my opinion and you need to do what you like the best.

On the KnitPicks needles. Do you use a "rubber gripper to tighten you needles with? The old Boye needle sets came with them and I think Knitpicks sell the grippers. Just a small rubber jar opened. You could even make one from a rubber jar opener. I've never had one come apart since I started using it to tighten my needles. I hold the needle tip with the rubber and then turn the key that comes with the needles.

The sweater will look lovely and I'll have to see it when it is finished.

I'm always glad to hear when you do multiple rip-outs of a knitting project. This is not because I'm sadistic; I'm just pleased to know someone else who refuses to settle for knitting that just isn't quite "right".

It looks GORGEOUS the way it is... I love it!