Okay, let's start with a mini-rant:

Christmas is NOT in July, no matter how much you want to have a sale, or whatever.  I was surfing radio stations the other day and they were playing Christmas music, saying that they wanted to be the first.  I couldn't change the station fast enough.  I'm turning into a Scrooge I guess, not wanting to hear about Christmas until December 15th.  The one exception is for knitters who need to have things knitted in time.

Project Runway, season 8, starts next week on Thursday.  Afterwards, on the same night, is a new show, "On The Road With Austin & Santino".  That should be a hoot.  I can't wait.  I do enjoy my guilty pleasures.

There is a new Santana album (I mean, CD - I'm showing my age here!) being released on September 21st.  It's called "Guitar Heaven: Santana Performs The Greatest Guitar Classics of All Time".  I checked out the song list and it looks very promising.   He's playing with some wonderful people.  I'm looking forward to hearing his song with Rob Thomas.  They're playing "Sunshine of Your Love", the Cream song.  Their previous collaboration created "Smooth" and I still play it and enjoy it as if it was a new song.  I doubt that I'll ever get tired of that song.  I hope that there will be a tour to support the new CD.  I've seen Santana three times, the best from row 3 at Fiddler's Green.  I don't like the new, corporate, name.  Amazing show.  Geez, those are a lot of links!!  Here's a picture that I took that night: 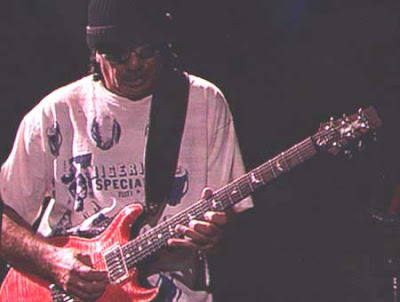 I'm putting the finishing touches on hats to send to a friend's grandson who is deployed to Afghanistan.  I've made one for every one in the unit, 173rd Airborne.  This weekend I'm going to shop for some items to add to the package.  Apparently they like snuff/dip but it's nasty stuff and I just can't bring myself to buy it no matter how much it helps them get through their time.  They aren't near the main camp so shopping for things like toiletries is difficult.  I might add some of that.  I'll also look for something fun to add.  I'll post pictures of the hats when the ends are all woven in on the hats and they are ready to go.
Labels: Life, Music, Special Knitting Projects

It doesn't get any better than "Smooth." So sexy!

Can't wait for Season 8 of Project.

Wow, hats for everyone in the Unit? How many is that? I'd send paperbacks to go with the hats -- even used are appreciated if they are current pulp fiction.