While in Kitchener, I checked out a yarn store, of course!  I went in search of Yarn Indulgences.  This place, below, matched the address, but didn't look like any yarn store that I'd ever visited.  But, I went inside and found a large, almost empty hall.  Almost empty.  Inside the front door were yarn displays and a counter with a cash register.  Apparently, this is a market on weekends, but the yarn store stays there all week, while other vendors leave. 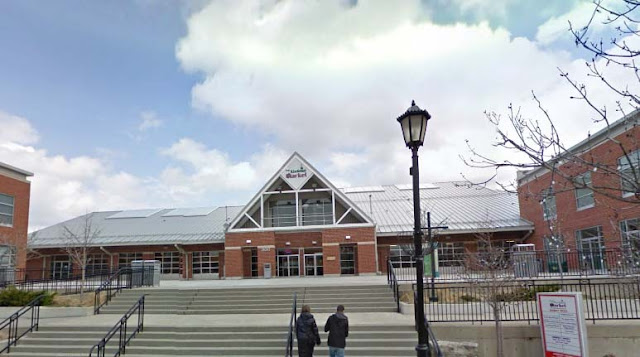 The yarns were very nice and the most popular and plentiful brand they carried was Debbie Bliss.  I picked up a ball of the Deonegal Luxury Tweed Aran for my Travel Afghan.  It will remind me of this shop and, of course, I had to choose blue for the Blues Festival.  It is 85% wool and 15% angora, 88 metres/50grams. 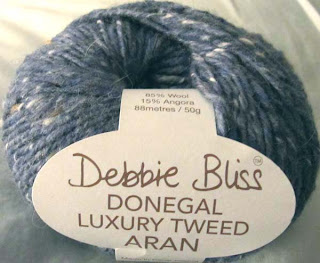 From there I drove the four hours to Kingston to visit my parents.  My daughter, son-in-law and grandson (such a cutie!) came to Kingston, too, as they had two upcoming weddings in the area to go to,  I finished knitting the Shaker Stitch sweater that I made for Braydon, but it's still very big on him, which really is fine.  I picked up buttons, but the darning needle that I brought with me to sew in the ends was too large for the holes in the buttons.  I'll sew them on when I go to see them next time in Calgary.  I'll post pictures and the details in my next posting.

In sad news, a few hours after landing back in Denver yesterday evening I received word that my father had died.  It's sad, but after years and years of escalating, debilitating strokes, it was a blessing.  He was 90 and had lived a full life.  I saw him several times in the hospital and nursing home while I was in Kingston.

Update:  I knit the next block of my Travel Afghan today using the Debbie Bliss yarn.  It's very nice to work with and the bits of angora add interest.  That makes 40 blocks/trips completed.  Unless I plan another trip soon, my next one will be to Venice Beach, California in October to visit with my friend, Ana. 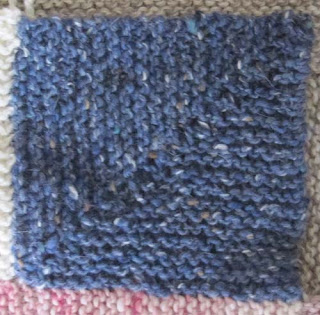 So very sorry for your loss.

Blesssings to you, girlfriend. So sorry for your loss.

Dear Joanne,
Please accept my sympathies on the death of your dear Dad.