Right now I'm listening to Santana's new CD, "Guitar Heaven, The Greatest Guitar Classics Of All Time".  I almost said "album".  Old habits die hard.  The guy is 63 and still rocks.  I haven't listened to all the songs yet, so my opinions may change as I listen to the rest of them, and play all the songs several more times.  The edition I have has two extra songs and a DVD.  There is a cool hologram on the cover. 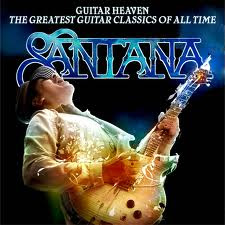 It's fun to hear his take on familiar, some favorite, songs from the past.  I wasn't sure what to expect when I first ordered the CD.  I expected excellent guitar playing, but other than that, I didn't know what the album would be like.  I'd heard the quiet "While My Guitar Gently Weeps" with India Arie, so I guess I thought that the rest would be similar.  I didn't expect such driving guitar riffs.  From the first note, playing Led Zeppelin's "Whole Lotta Love", I was hooked.

So far, my favorite song is #9, "Dance The Night Away" with Pat Monahan of Train.   Santana and Rob Thomas are back together again ("Smooth" is still one of my all-time favorites) doing Cream's "Sunshine of Your Love".

Based on first impressions, I like the CD and I'm glad I bought it, but his versions of the songs won't ever replace the originals, but then, I don't think that they weren't meant to.  The music is the same but different.  This album(!) is a good one.  Great listening for driving down the highway, volume at max, or at home with the headphones on.
Labels: Music

Haven't had a chance to check this one out, but it's on my list. Thanks for the review!

I heard some snips on the XM this weekend and it sounded great. Your review confirms it's worth buying. Thanks!