Red Sweater - Back to the Armholes

I'm really not into making checklists of New Year's resolutions, but I do consider things that I'd like to do in the new year.  One of my goals is to take good pictures of my knitting.  Sometimes I'm not blogging because I don't have a decent photo to go with the text.
Today is an example of poor photography.  I took a couple of dozen pictures with two cameras, tried to improve the picture in Photoshop, but nothing worked.
I haven't done much knitting in the past few months but this weekend I got the knitting bug and continued with the back of Braydon's red sweater.  I've reached the armholes.  The color isn't really as bright a red as it appears here.  The color name is Cardinal but I would call it cranberry myself.  The back is not as bumpy as it appears in the picture.  You're seeing the texture of the carpet.
So, until I learn more about photography, here's what I have to show.  You'll have to use your imagination to picture my knitting as smoother and a darker red. 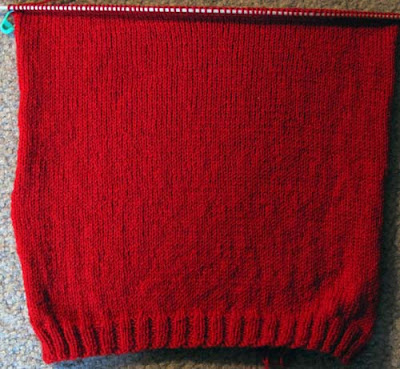 I love knitting with cheery red yarn myself, but it is nearly impossible to photograph! If you come up with a solution, let me know.

Even though you may not like your picture, your knitting is perfect!