I've posted a couple of blog posts about Braydon's red sweater recently.  Well, there's actually more to it than a plain red sweater.  I haven't shown you the front.

Before I do, however, I'll give you a bit of background information.  When my daughter was pregnant she told me that she was going to have a boy, but she didn't tell me what his name was going to be, so I called him "Smurf". 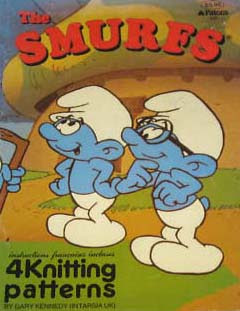 I found a sweater pattern to use as a template and started knitting, making the back and sleeves first.  Then, it was time to do the front.  Intarsia is one of my favorite knitting techniques, by the way. 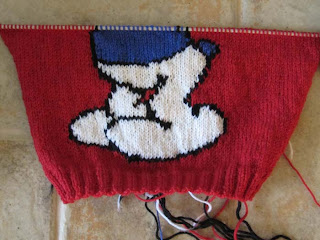 I've never minded all those ends and the necessity of weaving them in before calling a project finished. 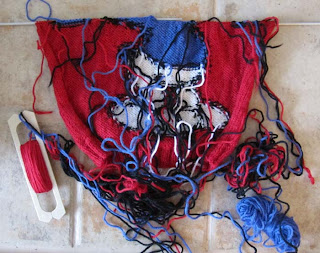 Before long the front was finished, ends all secured and the pieces were blocked. 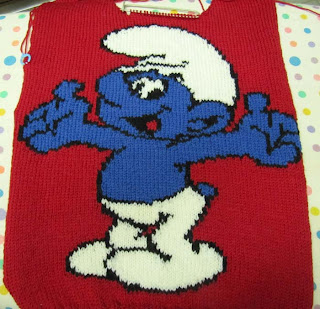 All that was left to do was to assemble the sweater...... 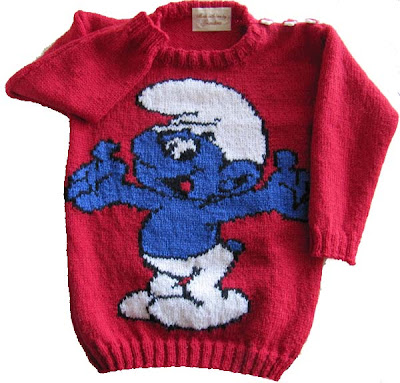 As a finishing touch I sewed 3 buttons onto one shoulder.  They are just decoration, not working buttons.  A Smurf really needs a toadstool, afterall.  I also added a label into the back of the neck.

I wrapped the sweater up in white tissue paper and added Smurf stickers and stickers to spell out Braydon's name, attached a blue bow with a tiny plastic Baby Smuf in the middle (for Braydon's Mom - it's too little for him), and off it went to Calgary. 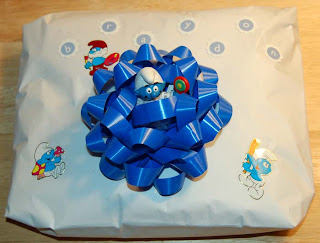 I can blog about this project now as Braydon has his sweater.  I'll post with specific details soon, along with a picture of Braydon modelling the sweater.
Labels: Knitting for Braydon

The Smurf sweater is just wonderful. Can't wait to see it modeled.