A hundred thousand welcomes.
My Mother's side of the family is Irish, emigrating to Canada during the potato famine in the early 1840s.  She has done an amazing job of tracing the family tree, along with photos.  It's been very interesting to "meet" my ancestors.  Her family's name is Donnelly, and we always celebrated St. Patrick's Day in our house.  There will be Irish stew on the table at dinnertime today.

Here's a little background that I found about the Donnellys on the Clanarans website:
﻿
Donelly, O’ Donnelly, Ó Donnghaile,

Ó Donnnghaile comes from the personal name Donnáil, which is composed of the words “donn” meaning ‘brown’, and “gal” meaning ‘bravery’. The Donnellys are descended from Donnáil O’ Neill, who was himself a descendant of Niall of the Nine Hostages. The Donnelly clan’s original territory was in Co. Donegal, but they subsequently moved to Co. Tyrone, where their name is remembered in the town of Ballydonnelly. Donnelly is the 65th most numerous surname in Ireland today.

Many of my ancestors lived in the town of Portadown, County Armagh, Northern Ireland.  It was very special to visit it several years ago and the people I met were warm and friendly.

Well, you can't have Irish roots and not knit yourself a special Irish sweater.  I've made a few in the past and gave away all but one.  It was a British pattern in Canadian yarn.  But, I need something more authentic, so I bought the Donnelly aran from the Clanarans website, based in Killarney, County Kerry. 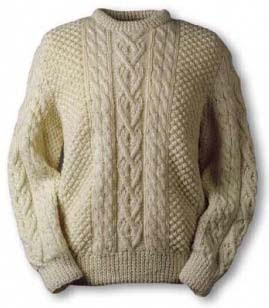 It's been in my stash for a while, but it hasn't been forgotten.  I also have the Armagh sweater by Alice Starmore from the Celtic Collection book on my wish list, but I must finish more projects before I can consider it.
Happy St. Patrick's Day to you!

The Donnelly aran is beautiful!