I've used Ravelry to keep track of my knitting projects since I joined in September, 2007 (has it really been that long?).  Every once in a while I'll post about pre-Ravelry knitting here.  Lately I've been getting the itch to do a complicated sweater, like a Kaffe Fassett multi-multi-colored design, or something similar.  I'm trying to be good and stick to my resolve to finish what's already been started but there'll be some colorwork ahead.  There's no doubt.

One of my favorite sweaters is Kaffe Fassett's Foolish Virgins which I think I first saw in Rowan Book 7.  I don't think I saw it before then, but it's possible.  Memories fade a bit over time!  The pattern instructs the knitter on how to make a cardigan, finished size 52".  The yarn used was Rowan Glace which is a DK cotton and heavy.  I made another sweater out of this yarn and it grows - but a toss in the dryer brings it back to size.  As a side note...it's one of the yarns that I'll be using in the cushion I'm going to knit fairly soon.
I wanted a smaller-sized pullover, in wool, so I made some changes. 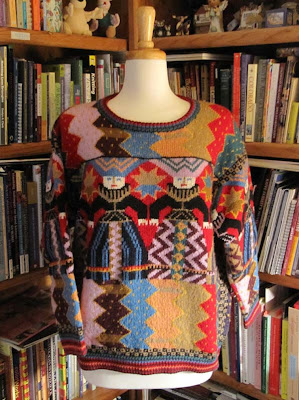 Even though the original pattern would make up a size 52", I needed to add to the design as I was using a thinner yarn, therefore, more stitches were needed to make it the size I wanted.  I extended the pattern at the sides and made the zig-zag design a wee bit longer.  This was around 1990, give or take, before computers, so the process was done with graph paper and colored pencils and then I taped the extra sheet onto my working copy of the pattern.

I was living in Lahr, Germany at the time and I bought the yarn at Wolle Rödel.  I don't remember the name of the yarn, but it was a little lighter than sport-weight.  I liked the quality and the fact that there were so many colors available.  I ended up using this yarn often for future projects.  I had a book of shade cards from Rowan and used it to match the colors as I wanted my sweater to be in the same colors as the one in the pattern.  Afterall, that's one of the things that drew me to the sweater in the first place.

I'm often asked how long it took to knit the Foolish Virgins and I don't really know.  I rarely knit just one thing at a time, in case you hadn't noticed!  However, it really didn't take all that long as I tend to get focused on challenging projects and will knit for long hours at a time.  Nothing bores me more than a plain, stocking stitch, single-color pullover.  I'll put it down more often than a pattern that occupies every knitting brain cell.

Rowan has made this pattern, in it's original form, available for free on their website.  You can find it here.  If I had to do it over, would I make this sweater again?  Without a doubt.  In recent years some of the old Rowan patterns have been updated to use yarn currently available, sometimes made into different projects.  This sweater had a later incarnation in various books, in a blue colorway, and as a scarf.

It's now been, unbelievably, over 20 years since I made this sweater and I still wear it and it's still one of my favorites.
Labels: Kaffe Fassett, Knitting Flashback, Sweaters

I can tell you exactly how long it would take me to make that sweater--forever!

Wow - what an amazing sweater! I am still really new to knitting (only 2 years or so), so I am really impressed/inspired by the amazing things you can make! That sweater is just awesome! :)