♪ If You Could Read My Stitches, Love

What a tale my swatch could tell.  ♫

(With apologies to Gordon Lightfoot!)

I admit it, I don't always do a gauge swatch.  I normally skip this step for shawls, afghans or baby clothes where a specific size isn't critical.  As long as I like the fabric that I'm knitting, I'm fine with being swatchless.

For this swatch I used both yarns, one for each of the triangles - choosing little-used colors from the pattern so that I wouldn't run out later on.  I started with the suggested needle size, 3.25mm.  For the pillow, I want it to be exactly 24" square so that a pillow form will fit inside properly.  ﻿﻿﻿﻿﻿﻿﻿ ﻿
﻿
﻿
﻿﻿﻿﻿﻿﻿﻿I'm glad that I did as I learned the following:

►  I didn't like the loose fabric I was creating, and the point where the yarns crossed was not a smooth, tight transition.

►  On measuring, I was not making gauge, which explains the loose fabric.  I knit another swatch on smaller needles, 3.00mm.  The gauge is now correct and the block looks good to me.

►  If I'd made the pillow at the looser gauge, I would have used more yarn.  I'm sure that I have plenty, at either gauge, but why risk it?

►  The intarsia is going to be fairly easy since the pattern is predictable.

►  After the gauge swatch was finished I took it apart and measured each length of yarn.  This told me that the two triangles use the same amount.  I thought that this would be the case, but now I'm sure.  I can precut yarns so that I don't have excessively long strands to deal with, especially since so many colors are involved. ﻿

►  Based on this little bit of knitting, using new-to-me Revive.  I'm finding that I like the yarn.  It reminds me of some of Rowan's earlier, discontinued yarns, such as Silkstones (from the 1980s, I think).  It has that slightly rough, organic feel.  If I still like it after finishing this project, I have another sweater that I'd like to do (but as a woman's cardigan).  But, that's for another time! 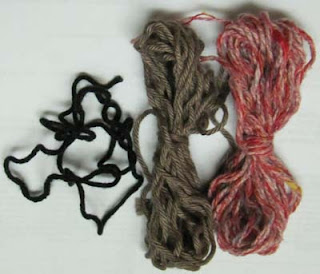 The two main colors for each block uses 159" (13 feet, 3 inches) of yarn and the small black rectangle in the center uses 20" of yarn.
Labels: Accessories, Kaffe Fassett