For as long as I can remember I've been drawn to quilting, although I've never tried it.  That's probably because I don't much like sewing.  I've tried to like it.  I really have.  I took many sewing courses, starting with Home Economics classes in grade 8 to spending my summers during high school taking sewing classes at the local Singer store.  I was happy with the garments and accessories that I made, but the sewing bug never bit.  Later, when my daughter was little, I made her skirts, tops, shorts and toys.  Still nothing, although it was a joy to see how happy my daughter was with my sewing projects.

The closest I've come to quilting was making placemats along with my friend, Barb.  We would buy fabric that was already quilted, cut out the oval shape of the placemat and sew bias binding around it.  They turned out nicely, too, and I kind of enjoyed myself.  But, that's not really quilting.

I've bought quilting magazines and poured over them.  I've admired the quilt top that my daughter made as a young teen, as well as a pillow that she made.  Both are beautiful.  I've watched many quilting shows on TV, usually knitting while watching.

A couple of weeks ago I watched Georgia Bonesteel's Lap Quilting show #1107.  I enjoyed it as much for the locale as the quilting.  She was visiting Offenburg, Germany which is only 15 kilometers from Lahr, where I spent 8 years.  The shop is Gerhard Humpert Sewing/Quilting Shop at Zahringerstraße 21a.

I've started forming a plan of returning to Germany, possibly in 2013.  Shows like this one, plus a Travel Scope show I saw about Fasching, make me anxious to go back to Germany.  When the time comes, I'm hoping to visit yarn shops, possibly quilt shops, as well as the beautiful sights of the Baden-Württemberg / Schwarzwald / Rhine area. 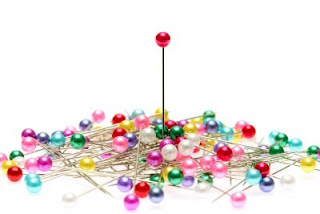