I've been very lucky to meet a lot of interesting people in my life and one of those is my former boss, Steve Johnson, aka Dr. J (right, below).  For the eight years that I worked for him I knew that he was a drummer/percussionist and that he played well.  I didn't know that he also played the harmonica.  He would bring in demo CDs of his band, but I'd never heard him play in person.  Last Saturday night that changed as I went to the Buffalo Rose in Golden, Colorado to hear Dorado.  It was nice to have some time before the show to catch up as I hadn't seen him in three years.

The band members are all talented musicians and everyone at the venue seemed to be having a good time.  The group is a jam band , drawing on The Grateful Dead and Bob Dylan, for example, as influences.  I liked their Jerry Garcia version of Dylan's Tangled Up in Blue. 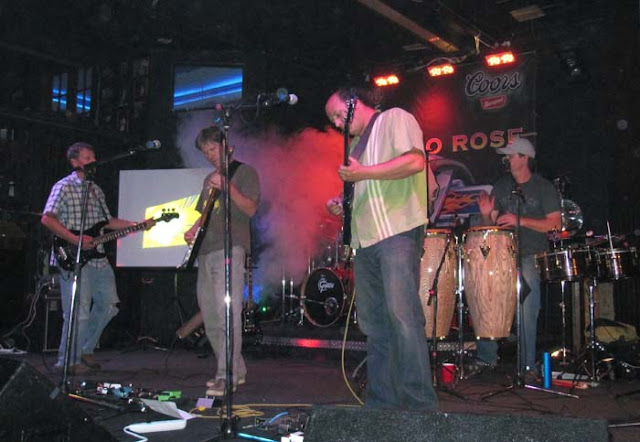 There was an opening act as well, Funky Weather, that played oldies by Sam and Dave, Sly and the Family Stone, Z Z Top and more.  I only caught part of their set and would love to hear them again.  The lead singer, Willy Smith, has a great voice.

I do love a night with live music!  Hopefully this is just the beginning of lots more nights of music throughout the summer.
Labels: Music Monday