Today was a very nice, relaxing day...the first one I've had in a very long time.  Jessica, Drew and Braydon took me on a tour of Calgary and it's much more interesting than I thought it would be.  It's going to be fun to explore the various parts of the city later on.

We went to a lookout point where you can view the skyline of Calgary: 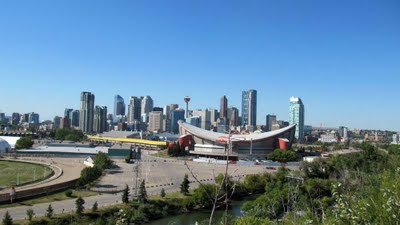 That's the Saddledome in the front, home of the Calgary Flames hockey team.  I'm sure I'll be going there for concerts often.  Santana is playing tomorrow night and I'd love to go but it's too late to get great tickets.  Another time.

Looking to the left of the skyline you can see the grounds of the Calgary Stampede, the world's biggest rodeo.  It's quiet now but come next July it will be the busiest place in Calgary.  In 2012 the Stampede will be celebrating its 100th birthday and I plan to be there. 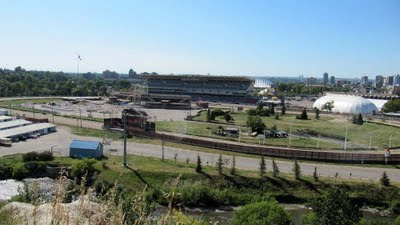 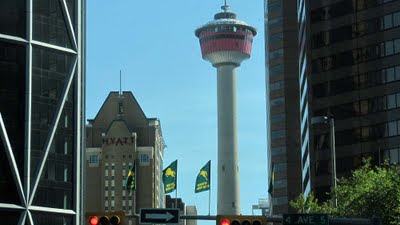 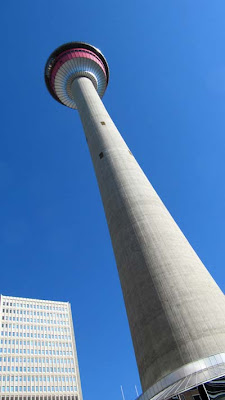 We drove through neighbourhoods such as Chinatown and Kensington and stopped and walked though Eau Claire, a recreational area with walking paths, music, shopping, playgrounds and more.  It's a beautiful place.
We ended the day with a very good meal at Montana's Cookhouse.  It was a fun and very full afternoon.
Labels: Travel

My husband would probably move to Calgary tomorrow if we could. So glad you're settling in.

Calgary has much to recommend it. Just wait until you find your LYS -- then things will start to feel like home!