Yesterday I found out that I'd made to the Poorly Dressed website (posted 08.17.11 - 11:53 am).  What an accomplishment, hahaha! "I'd like to thank the academy, my mother, my teachers, and most of all, Vanilla Ice for being such an inspiration. Yo!" 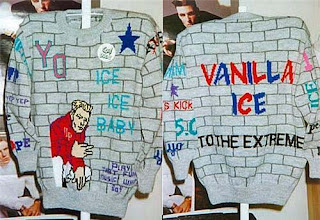 I've had quite a few inquiries about the availability of this sweater, the New Kids on the Block sweater, or the patterns.  Right now I don't know if I even have the pattern around here somewhere.  I rather doubt it as it's been 20 years since I made these, but anything is possible.  Since I've packed up boxes for my move I can't do a search.  Would I ever knit these again, or make the pattern available?  A definite "maybe"!  I'd have to be sure that I'm not treading in illegal territory as far as copyright is concerned.  If there is an update later on (after the move), I'll post about it here.
The packing is almost finished and I still have the fun (?) of unpacking ahead of me later on.  The hard part was packing some knitting that would hold me over until I get a chance to take my yarn out of the boxes and bags when I get to Calgary.

Like a lot of knitters, I think I packed too much, but I don't want to run out of projects.  In one large plastic bin are the following, each is packed up like a kit with yarn, needles, pattern and notions:

SHAWLS:
- Damson (it's going to be a little knitalong with my friend, Sheila)
- Multnomah

HOME:
- Triangle Squares Cushion (can't wait to get back to this one)

DESIGNING:
- Knitter's graph paper (to design flags for an afghan)

Too much?  If I focus on these projects for the next few months I will have made a wee, tiny dent in my stash, finished some UFOs (unfinished objects) and had the pleasure of starting some new projects. Oh, and there will the yarn for Rowan's 4-ply Waistcoat waiting for me in Calgary.  Why yes, I did order more yarn!  I couldn't resist this pattern.  I'm such a weakling.

Back to packing and cleaning, but I'd rather be knitting, especially after seeing this list of projects!
Labels: Knitting Flashback

Hi there Joanne, so glad to be hearing from you again. I was happily surprised to find your message on my website.

I love how "urban" and "street" your Vanilla Ice sweater looks! I am digging the bricks pattern.

Intarsia I assume? Hope you will write out the pattern when you have time.

Good job on reaching out to your world-wide followers

Too much? oh my no. Goodness, you'll have all that done before they've even loaded the truck. I mean it's not like you have anything else to do before you move. Well, good thing is that you can always pop out to a yarn store and buy more when you run out!