First of all, the answer to guess-the-name from yesterday.  The yarn is called "Lipstick in the Dryer" and that made me chuckle.  I liked the thought that it might be called Sock Monkey.  I'm starting to lean towards making a long, narrow scarf, but that could easily change.
Yesterday I drove to Canmore and it was really pleasant, once I got going.  My GPS couldn't guide me out of the city because it didn't recognize the construction areas.  I finally worked my way to another part of the city and then found the highway heading west and I was on my way.  It started out with the GPS telling me where to go and ended with me telling it where to go!!
I was really surprised by the highway as it started out as divided, then narrowed to two lanes, and then to a long stretch where there were no shoulders and wasn't in great condition.  This is the Trans-Canada highway?
﻿﻿ The scenery was absolutely breathtaking, so close to the mountains and with the river at the base. 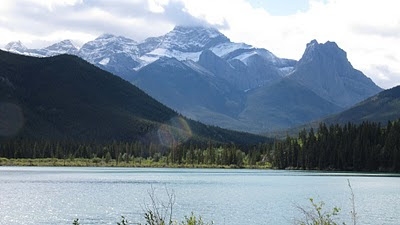 I was disappointed that I couldn't pull over at one point as there was a field with at least 30 donkeys grazing.  I would have loved to take a picture of them.

The landscape is very rugged as you can see. 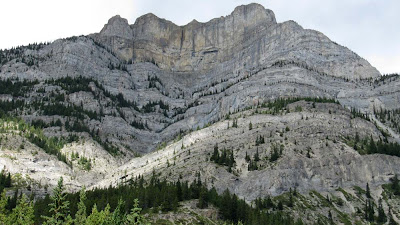 There was snow at some of the higher elevations: 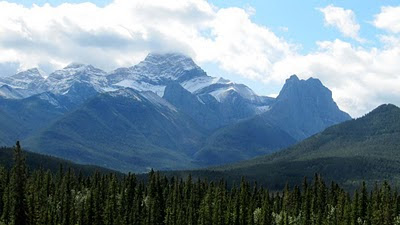 Close to Canmore you see these peaks named the "Three Sisters".  My daughter and her husband hiked on the trail (you can't see it in this picture) up to the top of the "Middle Sister".  They do things like that.  They're very athletic and it totally exhausts me just to hear of their activites. 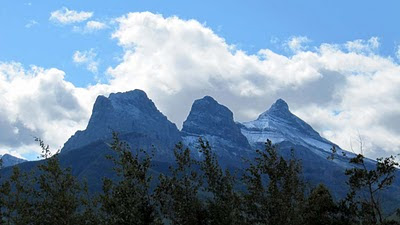 The weather was beautiful, warm and sunny.
That's all for today.  Tomorrow, Canmore - and the yarn store that I found.
Labels: Travel

Beautiful! Reminds me of Colorado.