I don't usually post twice in a day but I just heard this horrible news.  I'm pasting the entire story from CNN here.  A list of the names of the victims can be found here:  http://en.wikipedia.org/wiki/2011_Lokomotiv_Yaroslavl_plane_crash 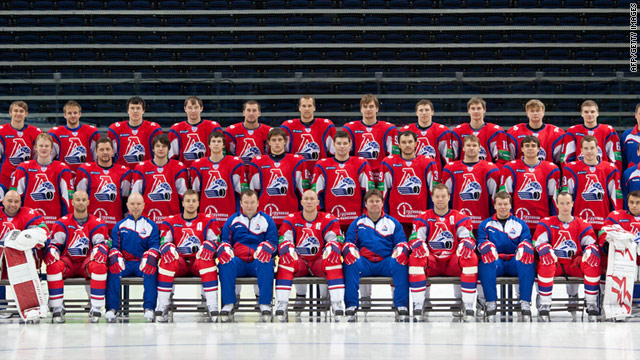 A picture of the Lokomotiv Yaroslavl ice hockey team taken on August 21.


Moscow (CNN) -- A plane carrying Russian, German, Swedish and former NHL hockey players crashed as it took off Wednesday afternoon from Russia's Yaroslavl airport, killing at least 43 people, Russian emergency officials said.
The Yak-42 aircraft was taking members of a professional hockey team to Minsk, the Belarusian capital, the Russian aviation authority told CNN.
The Lokomotiv Yaroslavl team -- which was one of Russia's leading teams and included players from Germany, Slovakia and Sweden -- was scheduled to play a match in the new Kontinental Hockey League, RIA Novosti said.
Lokomotiv Yaroslavl had a number of players with ties to the National Hockey League, according to the U.S. National Hockey League's official website, NHL.com.
The NHL cited Russia's Sov Sport website as confirming that the entire main roster of the team Lokomotiv was on the plane, along with four players from the youth team.
Lokomotiv's head coach, Brad McCrimmon, 52, who was born in Canada, previously played in the NHL and served as an assistant coach with the Detroit Red Wings, NHL.com said.
Others who played in the NHL include Karel Rachunek, a 32-year-old Czech native; Ruslan Salei, 36, from Belarus; Karlis Skrastins, 37, from Latvia; Pavol Demitra, 36, from Slovakia, and Josef Vasicek, 30, from the Czech Republic.
Demitra was a former Minnesota Wild and Vancouver Canucks center, RIA Novosti reported, while fellow center Vasicek was formerly with the New York Islanders and Carolina Hurricanes. Salei previously played for the Anaheim Mighty Ducks, Colorado Avalanche and the Red Wings.
A Russian Emergency Situations Ministry representative said there were 45 people on the plane, including eight crew members, of whom two had survived. It had earlier said 37 people were aboard.
Twenty-nine bodies have been recovered from the crash site so far, the ministry spokesman told CNN. He added that the plane crashed on the banks of the Volga river, with parts of the plane falling to the ground and other parts into the river.
The Russian Federal Aviation Agency said earlier a number of people had survived the crash, but their condition was critical.
A national championship ice hockey match between Salavat Yulayev and Atlant was halted in the city of Ufa after reports of the crash.
Players from both teams and spectators observed a moment of silence before leaving the stadium. Many in the audience were crying, Russian state TV footage showed.
The president of the Russian national hockey league, Alexander Medvedev, took the microphone at the stadium to say representatives from both clubs had asked for the match to be called off because they had ties to many of those at Lokomotiv.
He said: "I would like to assure you that we'll do everything we can to make sure that the first-class ice hockey in Yaroslavl will continue and that the Lokomotiv club will remain as one of the strongest clubs in our Kontinental Hockey League."
An aviation agency spokesman, Sergei Izvolsky, told CNN the crash occurred around 4 p.m. (8 a.m. ET) during takeoff because the plane couldn't reach a safe altitude fast enough.
The aircraft collided with the antenna of the airport beacon, fell to the ground and broke into several pieces and caught fire, Izvolsky said.
It was a charter flight with a plane operated by Yak-Service Airlines, he said. Yaroslavl is about 155 miles (250 kilometers) northeast of Moscow.
Russian President Dmitry Medvedev instructed the country's Investigative Committee and other law enforcement agencies to probe the crash.
Prime Minister Vladimir Putin also asked Transport Minister Igor Levitin to go to the scene to organize efforts to examine the cause of the crash, Putin's press office reported.
The crash came as an international political forum opened in Yaroslavl, with participants expected to include Dmitry Medvedev, the prime ministers of France, Spain and Italy and South Korean President Lee Myung-bak.
Medvedev plans to visit the crash scene to pay tribute to the victims before attending the forum on Thursday, the Kremlin press office said Wednesday.
CNN's Maxim Tkachenko, Josh Levs and Jennifer Deaton contributed to this report.

Former members of the Colorado Avalanche, Karlis Skrastins and Ruslan Salie are believe to be among those who died.
Labels: Hockey, Life