Yesterday I heard the news that the plane carrying a hockey team went down in Russia.  Among the dead were two former Colorado Avalanche players:  #3 Karlis Skrastins and #24 Ruslan Salie.  I don't know these men but I felt their loss just the same.  I've been to games and seen them play.  I've cheered them on, hoping that they'd get the puck, score a goal, avoid a check from an opposing player.......

This time the opposing player was bigger and tougher.  A plane crash.  It's hard to believe that all of the young men will never take to the ice again.  I can't even imagine how their families must feel at a time like this.  I feel badly for all on board, and, on a personal level, I'm thinking of Skrastins and Salie.

In honor of Skrastins and Salie I'm knitting a pair of socks in the Colorado Avalanche colors.  It's nothing much really, but makes me feel a little bit better.  These will be called the "S & S Socks".  The colors in the picture aren't accurate.  It's was too bright outside when I clicked this photo.  The blue is really more of a sky blue and the other color is burgundy, not magenta.  For now, however, this will have to do.  Somehow, right now, it's feels too trivial to think about. 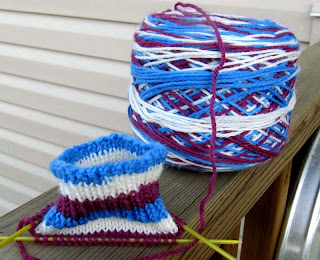 This statement was released by the Colorado Avalanche yesterday:
Colorado Avalanche Hockey Club Statement On The Lokomotiv Hockey Team Plane Crash
Wednesday, 09.07.2011 / 3:27 PM /
“The entire Colorado Avalanche organization is deeply saddened by this morning’s horrific news regarding the Kontinental Hockey League’s Lokomotiv Yaroslavl,” said President Pierre Lacroix.
“Moreover, we are all in a state of shock regarding the deaths of former Avalanche defensemen Karlis Skrastins and Ruslan Salei. Our thoughts and prayers go out to their families as well as those involved in this devastating incident.”
“I am still in disbelief about today’s tragic news,” said Executive Advisor/Alternate Governor Joe Sakic. “Both Karlis and Ruslan were unbelievable individuals and great teammates. They will be sorely missed. My condolences go out to their families and all those affected in this tragedy.”
Skrastins spent four seasons with the Avalanche, appearing in 275 regular season games from 2003-2004 to 2007-2008. He set an NHL record of 495 consecutive games played by a defenseman, while playing for the organization.
Salei spent three seasons with the Avalanche, appearing in 101 regular season games from 2007-2008 to 2009-2010.
Labels: Hockey, Life, Socks

I'm just stunned at this awful news. Stunned and sad.