An update to those of you who have written to me about my New Kids on the Block sweater and Vanilla Ice sweater.  I would reply to you personally but I either don't have your email address or it's on my desktop computer in storage (I'm still in the midst of my move from Colorado to Canada. 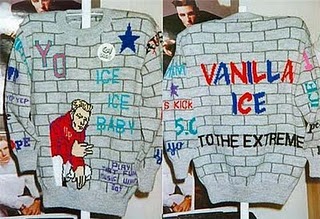 To answer the questions I've been asked:
There is also the issue of copyright infringement.  When I made the original sweaters I admit that I really wasn't aware of copyright.  It wasn't something I knew about or thought about.  I did make money by selling some of the sweaters but ended up losing when you think of the time involved to knit the pullovers.
I would need to know that I had permission from the New Kids on the Block and/or Vanilla Ice.  I wouldn't know where to start with that.  I'm now know about copyright laws and will honor them.
If you're still interested and it's something that would be good for both of us, and if the details can be worked out, then please email me.

It's been a blast to get your emails and revisiting the past has been such fun.  I thank you for that.  You people have "the right stuff"!! 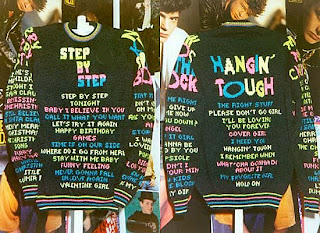