Hopefully the title means "it was a good meal"!

Yesterday's attempt at cooking a Mexican meal from the Dos Caminos Mexican Street Food recipe book was a success.  I went to the local Mexican grocery store and got the ingredient that I was missing:  chipotle peppers in adobo sauce.  There was enough in the can for about 5 meals so I froze the remainder into small portions. 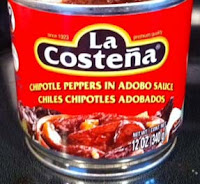 There was no picture with the recipe but it was pretty obvious what the meal would look like.   There were a lot of small, spicy meatballs covered with a sauce, topped with cheese and a few sprigs of parsley. 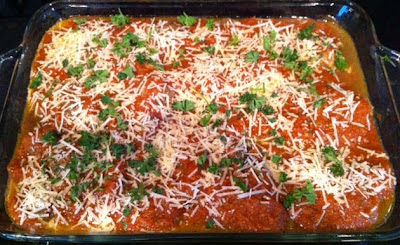 I made a couple of changes.  The recipe called for 1 lb. each of ground beef, veal and pork.  I used ground beef only.  There were a lot of liquids that went into the meatball mix which made it difficult to roll, let alone browning the meatballs.  Instead, I rolled them as best as I could and put them into a baking pan, then into the oven to brown.  Once they were browned I drained off the excess grease, poured the salsa over it all and then baked the meatballs for about half an hour.  They turned out just fine and I'm betting that the flavor was the same as the original recipe.

The salsa was really flavorful and I would make a double or triple batch next time, freezing the extra for other recipes such as baked chicken.  The meal was a little spicy hot and I'm a big time wimp but I had the sour cream nearby - for medicinal purposes, you understand.

I made this meal for my daughter and son-in-law and they loved it, saying that I could experiment with new recipes on them anytime!  I'm undecided as to what I'll make next time but there are a couple of breakfast recipes that are tempting me.

After all that cooking I think it's time to relax and knit.