I'm finally getting a chance to write a blog post again.  Savannah completely exceeded my expectations.  The scenery was more beautiful than I thought, the people were nicer, the culture and history were richer, the weather was warmer.  I loved the trip, with the exception of the fact that I was sick the entire time (ear, throat and chest infections that came together to make me feel like I was dying, or wishing I was).  Thankfully, I'm now on the mend, slowly but surely.

So, let's start with some of the scenery and culture.  With limited time, the best way to see the city is to take one of the on-and-off trolly tours.  The trolly takes you around the city and the driver tells you what you're seeing and why it's of interest.  You can get off the trolly and explore on your own, getting on again later on and continuing.  We had barely begun the route when a man came running up the street, waving his arms and got on the trolly.  He was looking for a particular location and it turned out that he was already exactly where he needed to be. 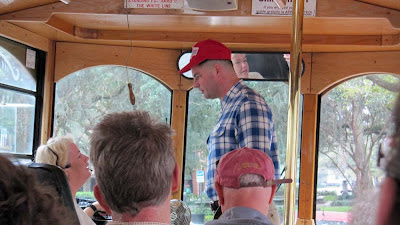 When he noticed that the trolly was full of people he waved and said hi and told us that his name was "Forrest, Forrest Gump".  Before he got off the trolly he said that he would have shared his box of chocolates (which were under his arm), but he ate them all.  Charming man, he was!  Lovely accent.

The tour took us through the Historic District, past the 22 Squares, each with its own story, past the Savannah College of Art and Design (SCAD), the First African Baptist Church and Cathedral of St. John the Baptist, the Juliette Gordon Low's birthplace (founder of the Girl Scouts), numerous parks, statues and fountains, along the waterfront, shopping and tourist areas and restaurants.  It was a good way to get a feel for the city and I highly recommend it.  We also saw the Mercer-Williams House.  If you saw the movie, "Midnight In The Garden of Good and Evil", it's the house where the murder took place.  The movie was based on a true story. 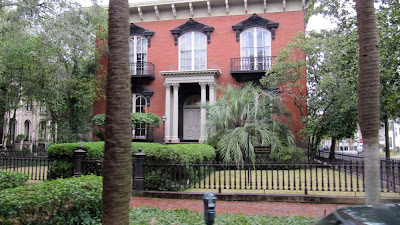 After the tour we went to visit the Wormsloe Historic Site, about 15 miles out of Savannah.  I was first drawn to it when I saw the cover of Gregg Allman's newest CD, Low Country Blues. 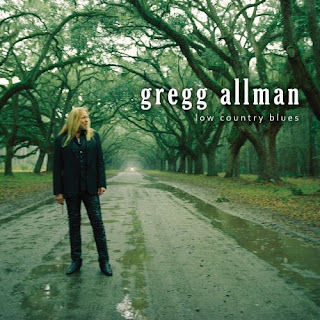 I thought the road on the cover to be incredibly beautiful and I had to see it for myself.  It was more stunning than any picture can show.  It's a special feeling to be under all those huge old oak trees, dripping with Spanish moss, that hang over the road and go on and on.

This barely scratches the surface of the sights in Savannah.  Next time... I'll be travelling to the coast:  Tybee Island, Georgia and Hilton Head, South Carolina, y'all!
Labels: Travel

Your photo of Gregg's album cover location was far superior to the actual album cover, great job.
Do you like the album, I was a bit disappointed.