I like to know how things are made, so yesterday I took at dyeing class at the Make One yarn store.  The teacher was Sam from Yummy Yarn Studio. 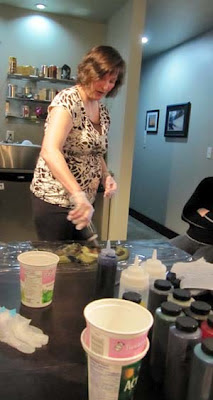 It was quite an eye-opener.  Dyeing yarn is very labor intensive and there are so many variables.  Yarns can change color due to the content of the water (chlorine in the water, for example), the type of base yarn, how much dye is used, the temperature of the water, whether or not the yarn is wet when dyed, the type of dye that is used, and more.

Sam opened the class with some anecdotes about some of her successes and failures in choosing colors.  When something didn't work out for her, she explained what she had done and how she tried to change the color to something she liked.  She walked us through the process, explaining each step that we'd need to do, and why it was necessary, e.g. why we use vinegar.  It's to set the color.  She also told us about the dangers of working with the dyes and the safety precautions that we should take.

Then, we were paired up  so that we could help our partner, and vice versa....and let us loose to let our imaginations run wild.  We were warned that the colors we see when putting the dye on the yarn might not be what we end up with.  We were told to expect surprises and to find a way to love the results even it wasn't what we'd originally intended.

This dyeing project belongs to the lady who was across the table from me.  The dyes are acid dyes.  After we tied yarn around the skein to prevent it from becoming tangled we laid it on a large piece of plastic wrap (like Saran wrap), squirted vinegar on the yarn and the experimented with color.  After than, we closed the plastic wrap all around the skein and pressed on it to push the dye into the yarn.  We folded up the yarn into a little package and put it in a steamer to add heat to the setting process.  After at least an hour it was hung on racks to dry.  I brought it home when it was still damp and hung it up here to finish drying.

Each of us were told that we would dye three skeins of sock yarn, and the store donated a skein of DK weight yarn.  My results weren't exactly what I was aiming for when I started, but I like three of the four anyway.  The colors in the photo, below, are a little off.


The sock yarns are the three skeins on the left.  On the right is my DK skein.

Left:  This was the second skein that I dyed and I wanted to see how solid or variegated the result would be if I only used one color of dye.  The color is "bluebell" but it actually turned out more purple than expected.  It's more purple than it appears in the picture.  There was only a small amount of variegation and this is probably my favorite skein of the four.

Second from left:  This was my first attempt.  I only used two colors, "salmon" and "turquoise" and was hoping for a southwest theme.  The salmon was a little more intense than I thought it would be and I wish I'd had more turquoise to use but it was a popular color and went fast.

Second from right:  For this skein I started with "olive", added "silver", and then just started adding more colors at random.  I had no idea what I'd end up with and I like the result which looks very much like fall colors.

Right:  The last skein I dyed was the DK and it's my least favorite.  I didn't care for the yarn much when it was undyed and dyeing it didn't change my opinion.  As a matter of fact I liked it even less after dyeing.  I was going for the colors of the Colorado Avalanche hockey team.  The burgundy looked pale even at the beginning and I thought I could bump it up a bit by adding some red.  It ended up looking rather purplish.  The blue wasn't too bad.  I'll likely use the skein for a charity scarf as it didn't turn out to be the colors I wanted, unless someone wants it.  It's going to be a while until I get to knit the socks.  The queue is long.

All in all, it was a very interesting and educational day.  Now I understand why hand dyed yarns are so pricey.  With all of the time and labor involved, it's worth every penny.
Labels: Classes

I haven't tried dying yet (unless you count a pair of socks I dyed with tea). I don't see it in my future. I'm very happy with supporting other dyers. :)