We lost another great in music on Thursday:  Levon Helm, 71. He was probably best known as being the drummer of The Band as well as its vocalist. When you hear songs like "Up On Cripple Creek" or "The Night They Drove Old Dixie Down", that's Levon singing.  Now, I'm not at all a fan of country music (an understatement), but somehow these songs didn't seem like country to me.  Close, but not too close.  Others might argue the point.  To me, these songs are closer to folk and Southern blues.  I just know that I like them.

That's more recent history.  However, back in 1959 Levon was part of the group "The Hawks", Ronnie Hawkins' band which were very popular in Southern Ontario.  Everyone I knew when I was growing up was a fan of Rockin' Ronnie Hawkins and some were lucky enough to go to Toronto to see him in person.  It's still on my to-do list.  Another member of The Hawks was Robbie Robertson who also went on to play in The Band.  What a talented group. 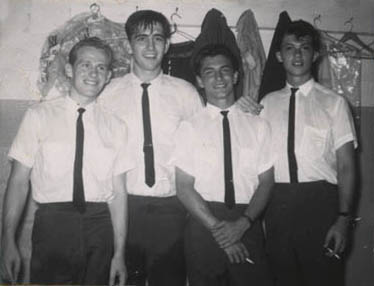 A friend, and talented guitarist in his own right, sent me this photo this morning.  The picture is from 1959 and was taken in Oakville, Ontario.  Left to right are Levon Helm, Will Jones, Rebel Payne and Robbie Robertson.

R.I.P. Levon.  Thanks for the music.﻿
Labels: Music

Do you know who shot this photo? Thank you!

I thought I remembered, but I didn't and it's driving me crazy. I wish I knew. I've been going through old files and the only thing I can think of is that it was on my old computer that literally overheated and was destroyed. If I ever find out, I will definitely post the answer on my blog. I'd like to know, too. Sorry.