I've been a knitter for as long as I've been able to hold a pair of knitting needles.  Of course, the early stages, around age 3, could hardly be called knitting as I would take the yarn and just twist it around the needles, but it was a start.  I remember that it was baby yarn as my Mom was making things for my baby brother.

My Mom knit from time to time while I was growing up.  She wasn't as obsessive as I am now, but she usually had something on the go, usually a sweater.  Even into her late 80s when her eyesight wasn't what it used to be she would still knit squares and donate them to the local yarn store for the Linus Project.  My Dad knit a few blocks as well.

Yes, he knew how to knit.  As a matter of fact, he made himself a zippered cardigan.  The story is part of family history and goes back to before I came into this world.  My Mom used to knit almost everything in fine fingering-weight yarn back then.  When she was finished she would give the remaining yarn to my Father and he added it to his cardigan.  It became a multi-colored garment but I'm told that he wore it until it fell apart.  I guessing that my Mom must have taught him to knit.  She must have taught me, too, but I have no memory of it.  In my teens I started knitting all the time and I remember teaching myself whatever technique I needed to know to complete the item.  My Mom said that I knew a lot more about knitting than she ever would, but after seeing her skirt and sweater, in the picture below, I'm not so sure.  I think that she was being modest.

I never met my grandmother as she died before I was born but I was told that she was never without her knitting.

My Mom had this picture of herself, taken in 1938 or 1939 when she was 19 years old.  She was on the Wolfe Island Ferry, on Lake Ontario in Kingston. 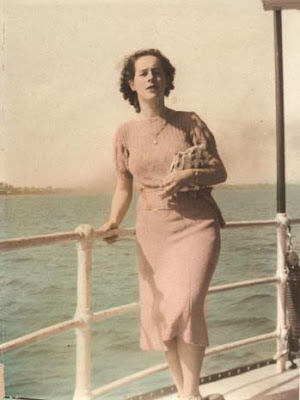 Here is proof positive  that she knitted, and knitted well.  She knit the dress that she's wearing.  I remember her telling me that she and a friend or two would go to the movies and take their knitting.  They would use fine yarn and small needles, cast on 700 stitches or more and knit round and round during the show, making themselves skirts.  I never thought to ask her if circular needles were around back then.  I don't remember seeing any until I was in my 20s but maybe I just missed them.  I'm a person who prefers to knit with straight needles whenever I can.  I bought my first circular needles in the late 70s in order to make a Lopi-style sweater.

I think that she did a marvellous job of making her outfit.  It certainly would have been a lot of work.  She was definitely very stylish.
Labels: Family, Knitting Flashback, Life

A wonderful story and a lovely picture! I´m grateful to my mother too. And I like your blog very much!

A nice tribute to a very special Mother. Wow, all those tiny, tiny stitches! Nice memories for you.

That was lovely--thanks for sharing it!