At the college in the town of Olds, Alberta there is a yearly event, the Olds Fibre Week.  When I learned that a couple of friends, Donna Druchunas and Deb Robson from Colorado, were coming to teach I was anxious to make the trip north to see them. 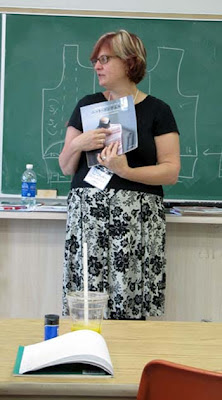 I sat in on Donna's Japanese knitting class. I'd taken this class a couple of years ago and it was really good then and it has become even better now. I learned more and one of these days I'm going to tackle a Japanese pattern. I know where to go for advice if I get stuck!

The only downside of the day was that the different venues were very spread out on the campus, but I understand that it was due to some construction that was going on.  It was quite a hike from the buildings where the workshops were held to the market.

The market was small but they had a fairly good selection of quality items.  I splurged on one skein of sock yarn which I definitely did not need but it was calling my name.  I was also eyeing the yarn bowls but reminded myself that I have a nice new one, and an older one that I'm going to try to repair one day. 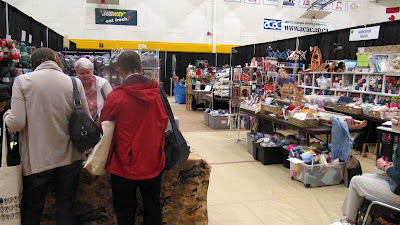 This picture shows only part of the market.  I visited it just as classes were getting unway for the afternoon so many of the people had left.

I was introduced to some of the other teachers and the organizer...nice ladies, all.  We all went out for an excellent dinner of Chinese food before I headed back to Calgary.  It was very good to see friends again and I'm sure that I'll be seeing them again before long.  I think that they'll be back again next year and I hope to spend more time with them when they do.  Also, I'm hoping to go and visit Donna when she moves to Vermont, a state that I like a lot.

It was a fun day that went by much too quickly.
Labels: Knitting Events, Travel