Now that I've figured out how to make the triangles to fill in the sides of the afghan I needed to decide what I wanted to do with the corners.  As you can see, they aren't squared up. 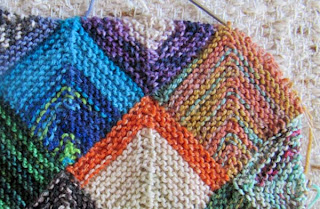 I could have left the corners the way they were.  There's nothing wrong with a rounded corner except that they aren't what I wanted.  So, next, I had to figure out how to make a small triangle.  I tried out a few methods, with more stitches, less stitches, center double decrease - none of these were pleasing to the eye or didn't lie nice and flat.

Finally, I hit on the right combination of techniques.  Here's what I did, keeping in mind that my base number has been 31, so yours might differ.  For this piece, you'll need an odd number of stitches.

With the right side facing pick up and knit 15 stitches.

Repeat these two rows until you have 5 sts remaining, ending after a wrong side row.

And there you have it, a small corner triangle. 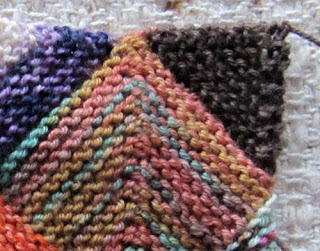 The corner triangles and the ones between the Vs work up very quickly and use very little yarn.  I'll have these done in short order, I'm sure.  After that, the next thing I'll have to think about is the edge and how do I want to finish it.

Brilliant! Isn't it a great feeling when the trial and error pays off?! The end result looks perfect.