In Tuesday's post I talked about the possibility of adding triangles between the Vs on my sock yarn afghan.  The purpose of them was to make my afghan into a rectangular shape with straight edges.  I tried a few experiments and was not happy with my results, but persisted.  I figured out that I would have to decrease 4 stitches on every other row to make a triangle.

If you look at all the diamond-shaped blocks you'll see a line in the center of each where the double decrease was worked.  I was hoping to keep that line in the triangles to make it consistent, but it wasn't working out.  I did some research online and found that others weren't totally happy with their attempts either.  Next, I thought I'd make the triangle with no center line at all, working the decreases on the edges. 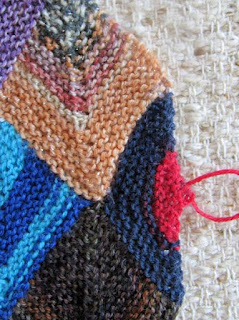 This triangle is on the right-hand side of my afghan and, as you can see, it doesn't look very nice.  While the outer edge is straight, the block is more of a U-shape rather than a V.  I scrapped that idea. 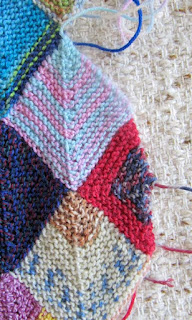 In fact, I more than okay with it, I actually liked the fact that all the decrease lines in all the triangles would be pointing towards the edge of the afghan.  I was also very happy with the sharp V-shaped edges.

As for the triangles at the top and bottom, there was no problem at all.  They are vertical, like the rest of the blocks, and, they also point towards to outer edge of the afghan.  Now I have 10 triangles worked on one of sides (so far) and I have a nice straight edge to my afghan.  I couldn't be more pleased. 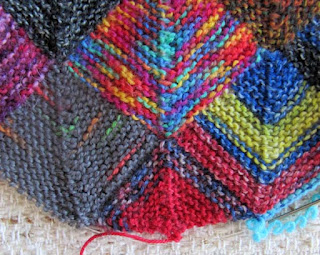 Here's what I ended up doing, and will be doing for a gazillion, more or less, more triangles!

First of all, my blocks were worked on 31 stitches, so if you're going to follow what I did, you'll have to adjust your number if you didn't use 31 as your base.  Secondly, you have to use a number that is divisible by 4, plus one 1 more stitch.  I decided to go with 28 +1 stitch.  Working with 29 stitches instead of 31 is close enough.

With the right side facing I picked up 15 stitches along each side of the diamond, to give me 30 sts.

You can just k1 at the end if you prefer but I like the snug stitch it gives at the end of the row when you knit through the back of the loop.  The k2tog in the middle tightens up the center stitch and makes the point sharper.

You're welcome to use this technique.  You can even post it on your blog or on Ravelry if you like, but with one catch.  You must include a link to my blog when you do:  http://www.rhythmoftheneedles.net/

excellent solution -- it's going to be fabulous!!

rsThank you so much! I'm about to finish my sock yarn blanket and was struggling with the edge triangles!

You're very welcome. There is also a description on how to do the corners here: