How I Spent My Summer Vacation - Part 1

Do you remember being asked that question when you returned to school in the fall?  I always hated it because, usually, all I did was hang out with friends and the teacher wanted more than one line in the essay.  Later, when I became a teacher, I realized that it was an easy way for the teacher to start the first day, minimum preparation!

So, here I am, writing about my summer but at least I have interesting things going on.  Last weekend I flew to Maryland as there were two things that I wanted to see, plus the requisite stop at a yarn store.  My main purpose to was to go to the Allman Brothers/Santana concert at the Merriweather Post Pavilion.  I have always wanted to see the Allman Brothers and here was my opportunity.  The fact that Santana was also on the bill was a huge bonus.

The concert opened with music filling every molecule of airspace.  It was loud and driving and continued well into the night.  After decades of wanting to see the band I was finally hearing the songs live, not just on a CD.  I was in heaven!

Here are two talented lead guitarists, Derek Trucks and Warren Haynes. Behind them are Butch Trucks (Derek's uncle) and Mark Quiñones. You can click on any picture to enlarge it.

Derek was just listed in Rolling Stones' latest issue as being one of the best guitarists in the world.  I couldn't agree more.  To say that he's amazing is an understatement. 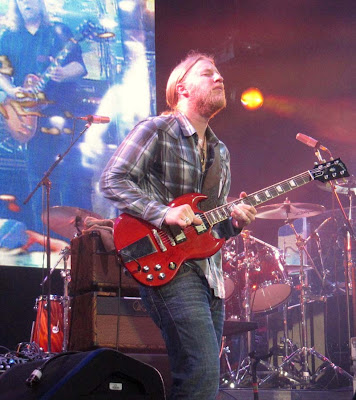 Gregg Allman has lived a life full of music, drugs, alcohol and medical problems (I've just finished his autobiography) and it shows in his face and in his mannerisms.  He looks rather frail and distant but when he sings, the voice is still there, as is his organ playing.  I was lucky enough to be sitting in the front row, close enough to check out his tattoos.  At one point he was looking my way and I gave the peace sign and he waved back. 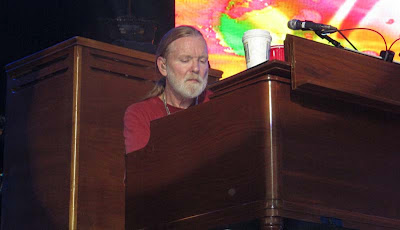 Playing bass is Oteil Burbridge.  This picture was taken when the smoke was released onto the stage.  He complimented the others all through the show and shone, particularly, during the encore when he played the opening bass notes of Whipping Post.  If you know the song I'm betting that you're humming those notes in your mind right now! 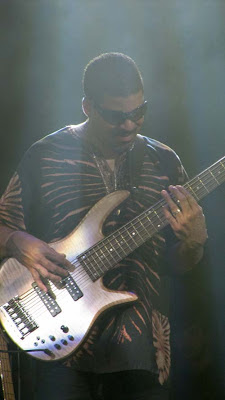 Not only did I see the musicians when they were on stage but I saw them walking around off stage, to the side, as the instruments were being set up.  It's a good thing as it was my only opportunity to see drummer Jaimoe Johanson﻿.  From my seat all I could see were his drums, and the cymbals blocked my view, other than his elbow. 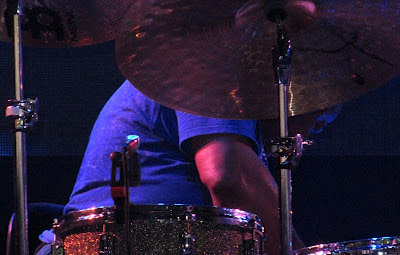 The concert was being professional recorded and CDs were being sold after the concert.  Now I can be back there again and again.  Seeing the Allman Brothers Band was an item on my bucket list.  However, now that I have finally been to one of their concerts I want to go again and again.  Hopefully I'll have the opportunity again one day.  This was one of the best shows I've heard, and I've been to many.

Next time, knitting, and after that, Santana!  Here's one more picture before I go and knit and listen to my CD... 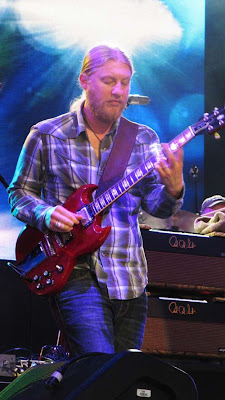