How I Spent My Summer Vacation - Part 3

The concert was on the last day of my trip, but on the first full day I decided to take a trip to the Antietam Battlefield from the Civil War in Sharpsburg, MD.

It felt a bit odd to me to be driving through the countryside at ~60 mph, air conditioning on and Led Zeppelin playing on the radio, a bottle of water in the cup holder.  My mind drifted to what it must have been like to be a soldier heading to battle on foot with little to eat or drink, shoes in poor repair if he had any at all and most likely frightened but not wanting to show fear.  Fields and forests stretched out on either side of the tree-lined road.  The trees were so large that I imagine that they were still there back in September of 1862.  How many soldiers took cover or shelter behind those trees?
﻿﻿
Driving through the towns close to the site was like stepping back in time.  I didn't see any large 'big box' stores or parking lots, no billboards advertising a chain of restaurants.  The towns were small, the road getting narrower.  I stopped at the field, above, just outside of Sharpsburg to soak up the scenery, so quiet and peaceful now.  Before long I saw the sign indicating that I was at the Battlefield. 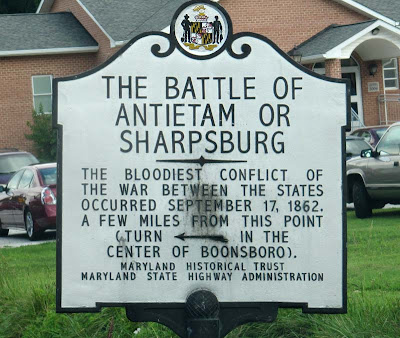 As the sign says, this was the site of the bloodiest one-day of battle in US history.  There were approximately 23,000 casualties, almost 4,000 of those were killed.  Everywhere there are memorials to the troops from the various states.  This is just one of the many: 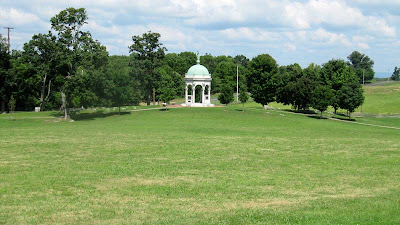 Later in the afternoon there were reenactors demonstrating part of the battle.  These men represented the South. 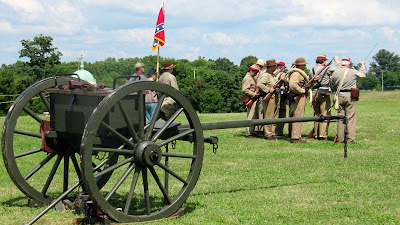 It was a very moving and humbling day.  Before visiting Antietam I watched the Ken Burns' documentary, The Civil War.  I very glad that I did as I learned a great deal, much more than what was taught in school.  If you ever get a chance to see it (I borrowed the DVD from the library), I highly recommend it.  Then, if you visit places such as Antietam and Sharpsburg, you'll not only know what's going on, you'll feel to your very soul. 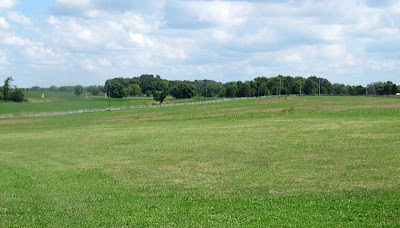