Road Trip - Yarn Along The Rockies

It was an amazing week in Colorado and, of course, it flew by much too quickly.  First and foremost, it was wonderful to see so many friends and to get caught up with them.  Some I had planned to meet, some I saw along the way during Yarn Along The Rockies.

The yarn crawl was wonderful and I'm sure that it was very successful for the shops and all the knitters.  There were 23 shops participating in the event and that's not all the stores in the area.  There are more, and yes, knitters in the Denver area are very lucky.

To participate in the crawl you were to pick up a passport at the first shop.  Optionally, you could purchase a bag ($7) on which all the participating shops were listed.  At each shop you get your passport stamped, pick up a free pin to add to your bag and enter the contest for prizes in the shop as well as the grand prize of one of the HUGE bags of goodies.  I believe that there are four grand prizes.  When you have stamps from all of the shops, you turn in your passport at your last stop and you are entered in the contest for one of the grand prizes. 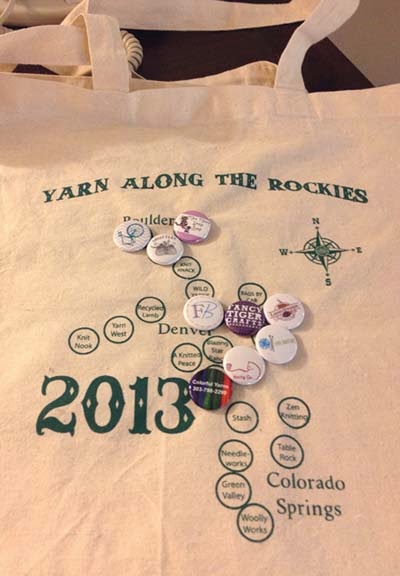 Starting in the north, on the first Saturday, my friend Sheila and I visited three of the shops:  Mew Mew's Yarn Shop in Lafayette; Gypsy Yarns and Shuttles, Spindles and Skeins in Boulder. We visited one other shop that wasn't participating - more on that in another post.

On Sunday I went out for brunch with a couple of friends and former co-workers.  It was so good to get caught up and see them again.  In the afternoon Sheila and I visited six more shops:  Fabric Bliss, Fancy Tiger Crafts, Lamb Shoppe and I Love Knitting in Denver; Knitty Cat in Englewood and Colorful Yarns in Centennial.  You can see the pins for these shops on my bag, above.

Monday was saved for non-knitting shopping, then an afternoon of knitting with the group at my old stomping grounds, A Knitted Peace, in Littleton.  It was so good to see everyone again.

Tuesday was a day for sightseeing, traveling around Denver and beyond but by the evening I was back in a yarn store.  This time it was for a dyeing class at Fancy Tiger.  I learned a lot and had such a good time.  The last time I was in Fancy Tiger it was in a small shop but it has moved to much, much larger quarters and is now one of my favorite shops.  I'm going to keep my eye on classes for future trips.

On Wednesday I headed south with Pam, Louise and Barb and visited:  Stash in Castle Rock; Table Rock Llamas in Black Forest; Needleworks by Holly Berry, Green Valley Weavers and Woolly Works in Colorado Springs.  I don't know if we did more yarn crawling or more laughing during the day!

On Thursday Sheila and I headed west visiting:  Knit Nook in Conifer; Yarn West in Evergreen;
Recycled Lamb in Lakewood (another shop that has moved to a bigger and better location); Knit Knack in Arvada and Blazing Star Ranch in Englewood.

That left only 3 shops.  On Friday morning I joined Ann and her group in Parker for some group knitting and chatting....nice ladies, all.  This gave me a chance to visit and pick up the pin from Zen Knitting.

I never got to the last two shops:  Wild West and Bags By Cab in Denver.  I had heard that the parking was difficult at both places.  All in all, it was a blast.  I covered a large area of Colorado, more than I might have visited without the yarn crawl.  I went to some shops that I've never been to before, met new people, made a last visit to Knitty Cat before they close their doors for good.  Zen Knitting is also closing and ran into some knitters that I haven't seen for a while.


I'm already looking forward to next year's yarn crawl.  If all goes as planned, I'll be going back to Colorado for it.  I did buy some yarn, but not as much as you would think.  There were a lot of temptations but I have a lot of yarn already and need to use it. Most of the yarn that I brought home came from the first stop.  I'll tell you about that next time.
Labels: Knitting Events, Travel