Tomorrow is Remembrance or Veterans' Day, depending on which side of the border you live.  I hope that you will take time to think of why we celebrate the day.  In Canada, people wear poppies in remembrance of the soldiers who fought for our freedom.  The poppies are sold by the Legion on street corners or can be found by the cash register in many shops.  Just drop in a donation and take a poppy.

I've bought several.  Somehow, they seem to work their way off my coat and get lost.  I also decided to knit a poppy.  I used the pattern by Laura Chau, which can be found by clicking here.  It's a free pattern but she is asking for donations what she will give to the Canadian Legion.  I made my donation. 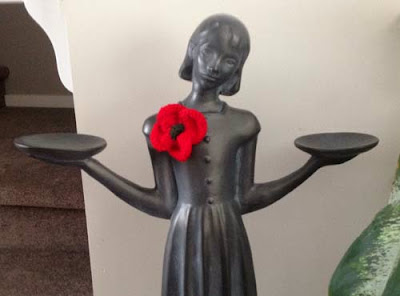 Pattern:  A Poppy For Remembrance by Laura Chau.

The center of the poppy should be black but since the dark green was at hand I used it instead. 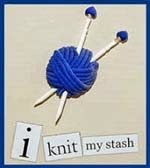 Correction about the Poppies.
Yesterday I watched in the TV the Remembrance Day ceremonies, from Calgary, and I saw a veteran interviewed, and he said, that, he wanted to make very clear, that, the Poppies are not sold, that, they are give away, even if someone cannot afford to make a donation, he or she can can get a poppy. The money collected from the donations goes to help the veterans and their families.
Matronacanadensis.
Calgary, Alberta.