I admit to a guilty pleasure:  the British soap, "EastEnders".  I've been watching it on and off for decades.  Recently I spotted an interesting scarf on the character of Terry Spraggen, Jr., aka Terry Jr, aka TJ - the son of Bianca's currently-off-again boyfriend. 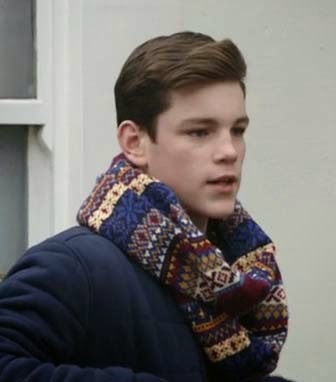 I wonder about its origins.  Is it machine or hand-knit?  Was it purchased in a store or did someone knit it for him, or maybe he's a knitter?  Why not?  Maybe it's a fair isle sweater that's been cut down into a scarf.

The colors are rich and lovely together.  I think I've seen some of these patterns before.  I don't think I've ever seen the design that's medium blue on a navy blue background.  I'll be watching for the scarf to make an appearance again sometime.

I can't be the only one who watches the knitwear in TV shows, can I?
Labels: Scarves/Shawls, TV

It was from matalan or primark she cant remember bless her

Thanks for solving the mystery. Your Mum has good taste! It's a great-looking scarf.

can yu find me a link please

If you do find a link I'd be grateful if you let me know too! :) Thanks!