No, not those Olympics.  I'm talking about the Ravellenics on Ravelry.  My challenge was to knit a square for my Jubilee Throw between the dates of the opening and closing ceremonies.  As of today I'm at the halfway point and I'm having some doubts as to whether I can finish in time or not.  Below, square D4 is pinned out for the picture but not yet blocked.

I've been doing quite a bit of intarsia (3 projects simultaneously) lately and I'm enjoying it but I have a feeling that there is a one-color sweater in my not too distant future.

If I were to do this block again (which I won't) I would make changes in color.  I used the original colors as in the afghan pattern - Rowan Felted Tweed DK in #151 Bilberry (background), #150 Rage (the squares) and #179 Horizon.

The Jubilee Throw is from a collection of designs from Kaffe Fassett and this one comes from the Box Star Jacket in Rowan #1.  I wish I'd knit the blocks in different colors as they are on the sweater instead of making all of them in red.  I'll keep that in mind for future afghan squares.  I'll look at the original and see if I would like to make any changes before I start knitting. 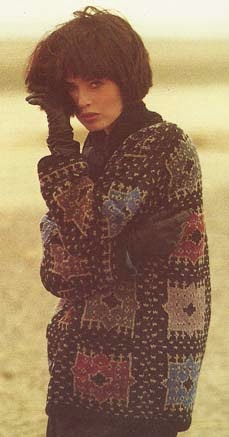 The other change I'm making is to switch to knitting with straight needles.  I've always knit intarsia projects on straight needles in the past but for some unknown reason I picked up circulars this time around.  I find that it's easier to keep the yarns less tangled with straights.  Updated:  I've done a few more rows since writing this and used straight needles.  I'm back in my comfort zone and working a wee bit quicker.  No more circs for intarsia for this girl.

This is the first of the 22 blocks that I'll be making.  It's time to start thinking about which one I'd like to do next.
Labels: Afghans, Rowan, Special Knitting Projects

Ooh, I DO love the multicolour squares too. Ah well! Good suggestion for the straights. I might try it to see what you mean, it certainly makes sense. Plus, it's not like I take my intarsia around with me anywhere.