I'd been working on another knitting project for the past few weeks but I didn't want to blog about it in case it didn't turn out.  As it happens, I'm happy with the result, and the recipient is happy with his gift.  First, a bit of the back story.  Last Monday I went to a very good concert, seeing a band that I've liked for at least 30 years, ZZ Top.  I was lucky enough to have a backstage pass which included a meet and greet and a picture with the band.

I can't say enough about the concert.  The band played for about two hours and included my favorites, Tush and La Grange.  It's amazing how much music can come from three guys.  They rocked the place.  There were two giant screens on the stage and at one point a picture of Jimi Hendrix was shown.  That was followed by Billy Gibbons saying that Jimi himself had shown him how to make the unusual first vibrating note in the song Purple Haze.  Of course, the voice is different than Jimi's, but the guitar playing sounded just like him.  It was magical to experience the spirit of Jimi Hendrix, his guitar playing, coming through Billy Gibbons.  Next, the band completely changed gears and sang an old Muddy Waters song, Catfish Blues.  I love the blues and this song sent chills through me.  I was wishing I could hear it again, and again.

Here are a couple of pictures that I took at the concert:


The jackets are very colorful and the embroidery is intricate.  They claimed that they got them at the Dollar Store.  I don't think so!!  They are beautiful and I wouldn't mind one for myself. 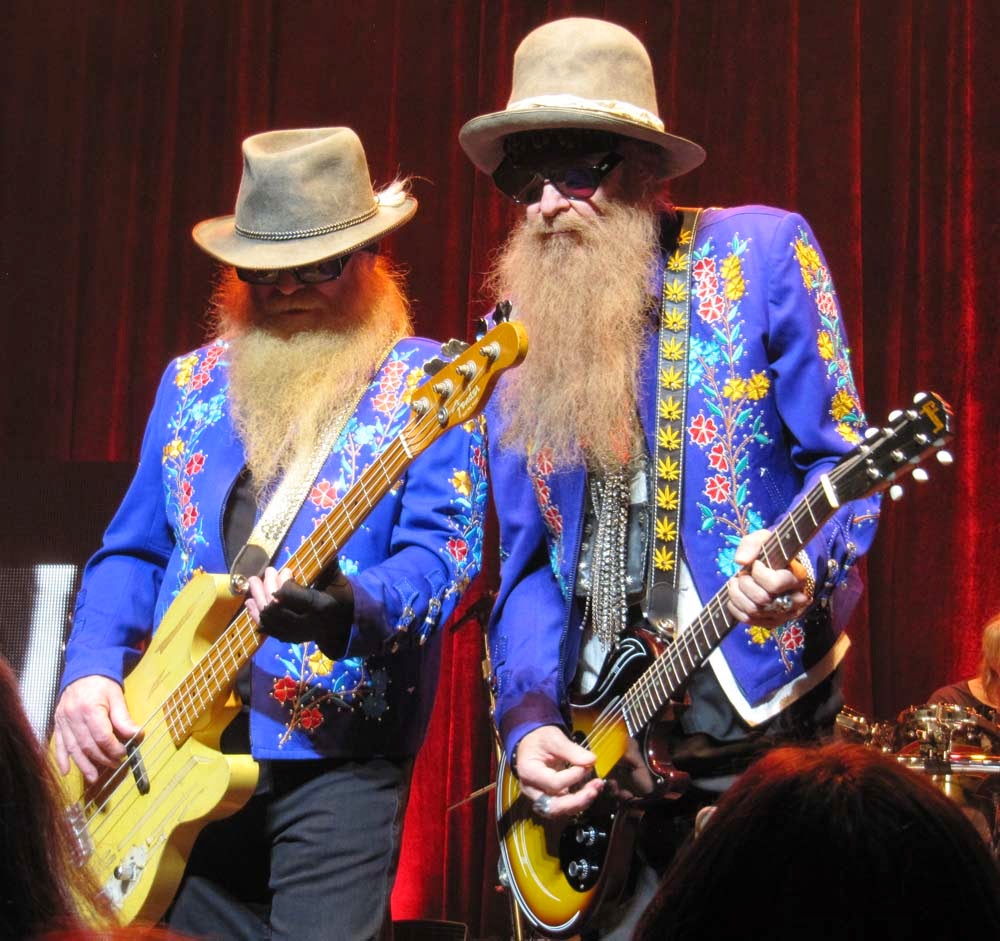 Once I knew I was going to be going back stage I decided to make a little gift for Billy Gibbons...a mini-me type of doll.  I started with the instructions from Alan Dart's gnomes and then made changes.  Now, it's been finished and delivered. 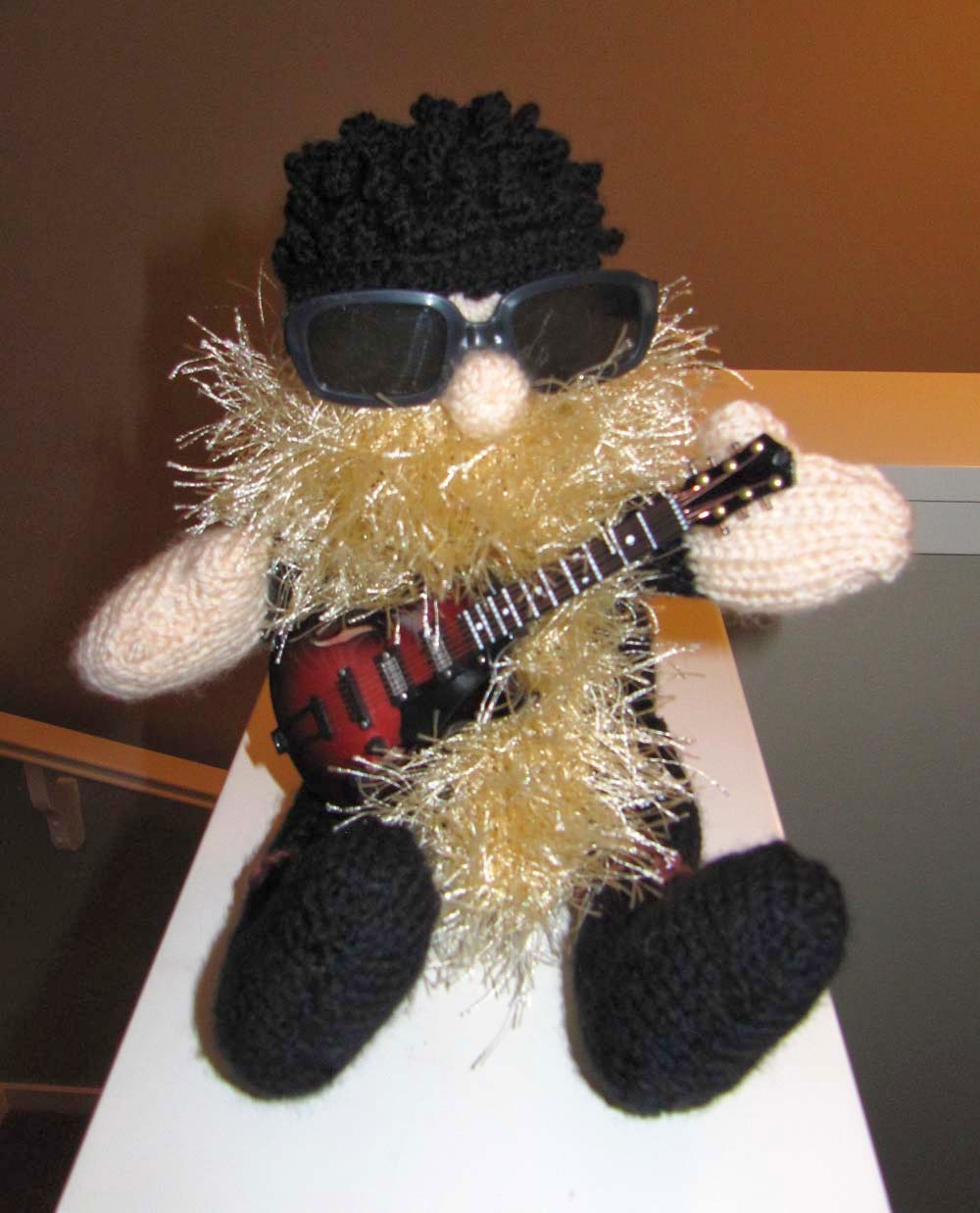 Yarn:
Lana Gatto Wool Gatto - color #5000 black used for hat, clothing and boots
Hayfield Bonus Toytime DK - #963 flesh
and
Lion Brand Fun Fur Solid - color #124 champagne for the beard
Dream In Color Smooshy - color: Chinatown Apple - only used a couple of yards for trim on the boots.
All yarn is from my stash.

Notions:  Doll-sized sunglasses - purchased at Michael's - I had to shorten the arms of the glasses.
Fiberfill stuffing.  Resin pellets so that he would sit properly
and
Gibson guitar - similar to one of the guitars he plays.  Purchased at Christmas in Prescott.

Note:  The Bamileke hat on the doll is my design. 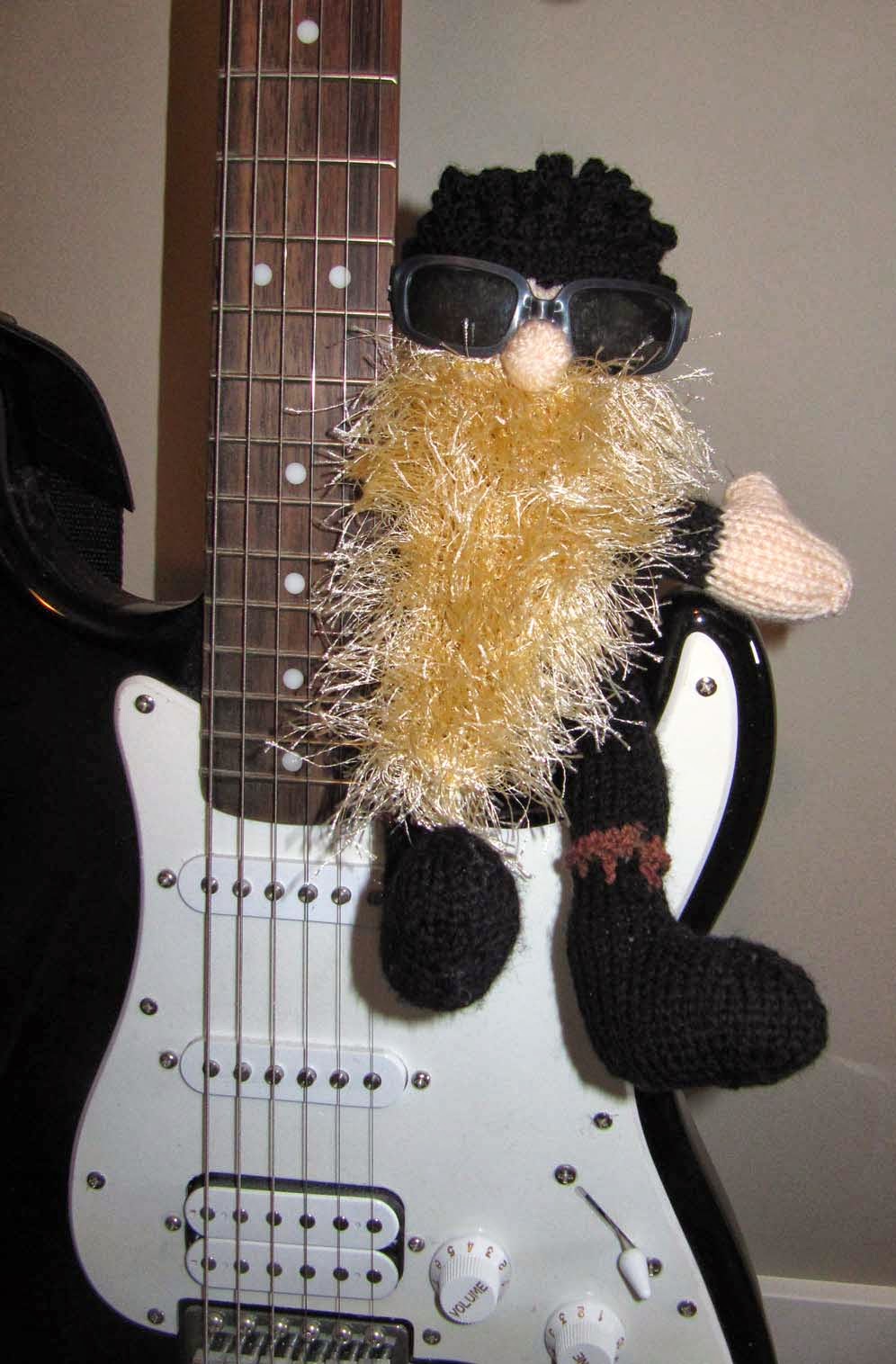 And here, below, is the band, with Billy holding Little Billy.
Left to right:  Dusty Hill (bass), me, Frank Beard (drums) and Billy Gibbons (lead guitar) with Little Billy
By the way, the hand you see on the right side of the photo belongs to actor Billy Bob Thornton who was in town to film a new TV show called Fargo. 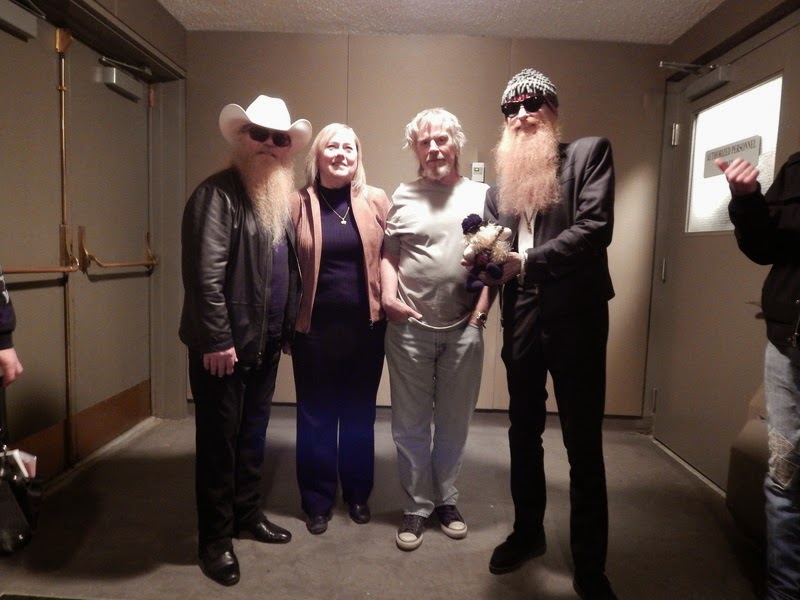 So so cool! What a lifetime experience. How does one get backstage passes, by the way?

I heard about the TV show, but didn't know BB was involved. Must look more.

Wow! Amazing! So cool to meet the band. Glad he liked the mini-me!