It's going to take more than one blog post to talk about the trip to Scotland.  It was arranged by Jean at Celtic Journeys and she did an exceptional job of taking care of us.  Nothing was overlooked.  The leader on the trip was Amy Detjen (I had to type that in purple as it's her signature color!).

The flight to Edinburgh was an overnighter from Chicago on Sunday night.  We ended up delayed, and delayed again, so five of us arrived quite late on Day 1, Monday morning, but the driver and all our other travel mates waited for us.  From there we went right to Dundee, just over an hour away, and checked into our hotel. 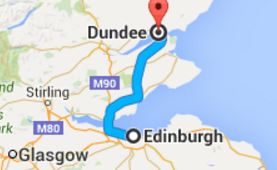 The rest of the day was for relaxing, getting acquainted and exploring the city.  It wasn't difficult to get used to the time change.  The return a couple of weeks later was not as easy.  Dundee gave us our first excellent impressions of Scotland.

On Day 2, Tuesday, after a good night's sleep, we were off to Scone Palace near Perth.  The long hallways showed the history of the Palace with the pictures, old wallpaper, tapestries and furnishings.  In one of the rooms a video was shown and we learned about the visits of King Charles II, Bonnie Prince Charlie, Queen Victoria, Mary Queen of Scots and others.  The grounds surrounding the Palace are beautiful. 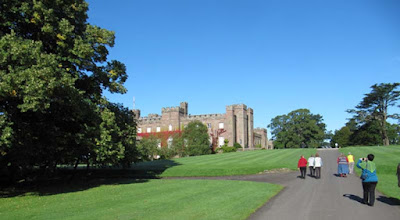 I would have guessed that Scone Palace had something to do with the scone biscuits, especially after stopping into the kitchen coffee shop.  The scones were the best I've ever had and now I'm on a search for a recipe for scones that are just as good.  We learned that there is no connection between the Palace and the scones. As a matter of fact, the two words are pronounced differently with the Scottish accent. 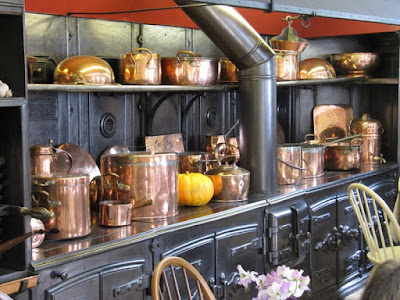 From Scone Palace we went to a distillery, stopping along the way to look at some hairy Scottish cows. 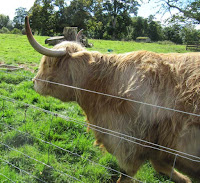 The Edradour Distillery is one of the smallest distilleries in Scotland, located in Pitlochry.  We passed by St. Andrews on the way.  Think "golf". 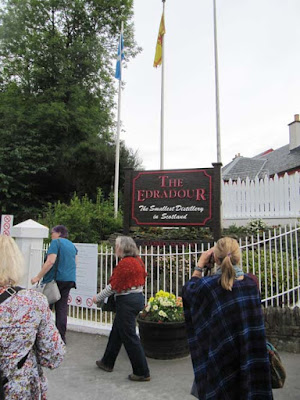 Even though I don't drink I like to see how things are made and this was interesting and educational.  You can take a little tour yourself via YouTube videos - part 1 is here.  After the tour we went for whisky tasting and an audio-visual presentation.  Aghhh.... many loved the whisky.  I found it much too strong, but I'm not used to it.  No...the picture isn't blurry because I was drinking!  One of the others on the tour was happy to take my glass of whisky so it wasn't wasted. 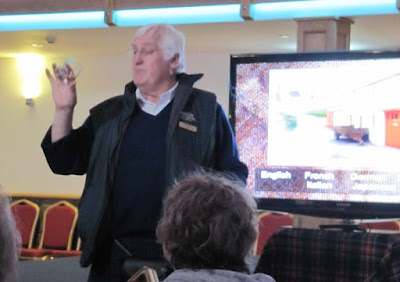 The day ended with a return to Dundee where some of us went to a pub for dinner, then some knitting back at the hotel.
Labels: Travel