News things I learned about this week:

Knitters know well that there are always lots of temptations around.  Usually it's yarn or a pattern.  More and more often it's a knitting trip, retreat or festival.  Here's one that I just learned about - Inverness Loch Ness International Knit Festival.  I've been to this area, cruised on Loch Ness (no monster spotted).  The Scottish Highlands are beautiful. 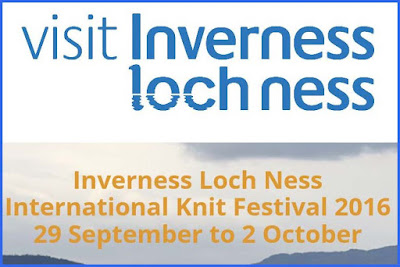 This is on at the same time as Shetland Wool Week. And speaking of Shetland, here's a book that I learned about from a friend.  She picked up a copy at the recent Vogue Knitting Live event in New York City - another tempting knitting event. 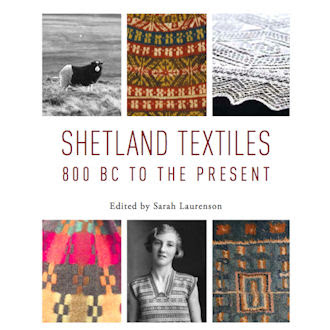 The title is "Shetland Textiles 800 BC to the Present" and is available at the Shetland Heritage Shop.

Closer to home:  if you're in Canada and close to a Superstore, you might want to check out the housewares department.  They have bags that I'm sure knitters will love.  They come in two sizes and are priced at $30 and $35 (Canadian).  In the Calgary store, NE,  near the Sunridge mall - there were also a few dishes with knitting patterns on them.  I saw a little cream and sugar bowl. 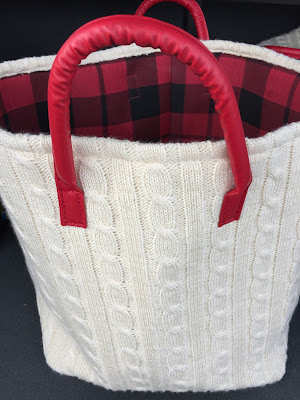 That's all for this time.  I'll post News Bits from time to time as I spot or learn of new things of interest.
No comments:
Labels: Accessories, Books, Knitting Events, News Bits, Travel

Once again Bing has posted a picture which will appeal to knitters, and other fiber artists.  This time the picture was on the Canadian Bing site.

What a great picture of muskox (muskoxen? muskoxes?).  The only place I've ever seen them is at the Calgary zoo.  One day I'd like to head north and see them in the open..

The yarn made from their undercoat is luxurious:  very, very soft, hypo-allergenic and 8 times warmer than wool.  It's called qiviut.  By the way, that's a good word for Scrabble - no "u" after the "q".  The yarn is expensive, but I think that every knitter should knit with it a least once in their lifetime.

If you'd like to learn more, I suggest Donna Druchunas' book, Arctic Lace.   Donna is a friend and I was a test knitter, but I would highly recommend this book regardless.  It's excellent.

I think, when it comes to knitting, I've lost my grip on reality.  I've always been a fan of fair isle knitting and this has intensified after visiting Shetland and seeing the wool and the fabulous sweaters.

The nice thing is that you don't have to start and finish this year....just finish a stranded project.  I've got a few on the needles and I thought this would help to give me the incentive and momentum to finish them, and maybe it will. 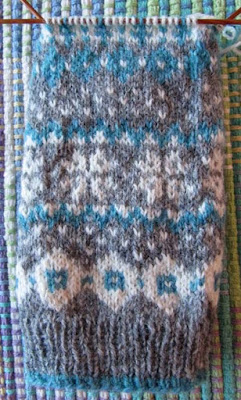 The downside is that most, but not all, of my stranded projects are sweaters.  I'm going to have to stay focused.  As if one knitalong (also know as a KAL) wasn't enough, I joined a couple of others - one is making a cowl and the other, a pair of adult-sized mittens.  I didn't know that January was Mitten Month!  Both projects are stranded, so they'll count towards my total.

Yesterday I started the Snowflake Mittens and I'm up-to-date on the clues.  Clue #3 comes out tomorrow.  However, mittens come in pairs.  This picture isn't great, but you can get an idea of what I'm knitting:  I'll have a better one later with the mitten lying flat, ends woven in (instead of hiding on the inside) and there is a thumb.

Besides the two already mentioned, some of the other stranded projects will be, in no particular order:
- Mini-mitten Advent garland.  I've finished 9 of the 24 mittens but all 24 must be finished in order for them to be counted in the year's tally
- Machu Picchu pullover by Carol Sunday - started
- Anatolia pullover by Marie Wallin - started
- Hairst Yoke Cardigan by Sandra Mason - bought the yarn in Shetland at Jamieson & Smith, not yet started
- Amphora by Jade Startmore - started a few years ago and set it aside - thinking of making it as a cardigan instead of a pullover
- Oranje by Ann Weaver - have the yarn, not yet started
- Talavera Dreams afghan - published as Persian Dreams - probably my favorite project ever.  I will finish this, probably sooner rather than later

If I don't finish 16 projects before the end of the year, it's okay.  I'll be thrilled if I can finish all or most of these.  I should probably add in some small, quick-to-make items.

Did you see the picture on the US Bing website today?   It makes me want to start knitting something red, lots of red, various shades of red.... with wool that I bought in Italy.  *dreaming*

Check it out if you can.  If you can't access the US site, you can try searching with Google.  I don't know if it'll work for you, but it's worth a try.

When it comes to my knitting I want to use all the hints and techniques I know of to make the project easier and more enjoyable.  Lately I've been working on two projects involving hexagons.  One is the Talavera Dreams afghan and the other is my second Travel Afghan that I call And The Road Goes On Forever.  Both involve making a number of hexagons, working in the round and then grafting the live stitches from each side of the last round to the next hexagon using the Kitchener stitch.

I found some colorful markers to help me remember when to increase at each corner, when I'm getting close to the end and when I'm at the end of the round.  You can use any markers that you like.  I prefer the coil-less bulb end markers in red, yellow and green - as in traffic lights. I don't remember where I found them but an online search may help.

The best thing to happen all year was the birth of my Granddaughter, Alyssa, a sister for Braydon (5) and Makayla (now 3), born on October 15th.  She is a sweet baby, very content and now starting to smile.  I had my fingers crossed that she would be born on October 8th, which would have been my Mom's birthday, but babies have their own agenda, and she obviously wanted a day all to herself!

The other highlights were my trips - to Denver, to Reno and Lake Tahoe for a knitting retreat where I took a class with Martin Storey and to Scotland for a couple of weeks.  I loved Scotland and was especially enamoured with Shetland.  What a great place for a knitter to visit. I was happy to be travelling again with my good friend, Pam, and met so many nice people on the tour, and in Scotland.  It was an amazing journey.


Of course, no year gets by without some downsides.  For me they were mostly health-related:  still no answers as to why I'm having trouble walking, a small bit of cancer (now resolved I'm hoping) and a disappointment.  I went to Denver in October and splurged on a great seat at a Colorado Avalanche hockey game.  Since this was the only time I was going to be able to see the team in person this year, I wanted to treat myself.  However, for me, the game was cut short.  A puck was shot over the glass and hit me squarely in the forehead.  It's hard to describe the shock and pain.  Fortunately, there was a doctor a couple of seats behind me who helped initially and then I was taken to the medical office at the rink.  To make matters worse, it was only about halfway into the first period.  The medical staff   said that I should go to the hospital.  I tried to go back to the game first, but just couldn't do it....so it was off to Littleton Hospital where they treated me very well.  To top it off, the Avalanche lost to the Columbus Blue Jackets.

I got this picture from a recording of the game.  This is the exact second that I was hit and those around me haven't yet noticed.  I was asked if I got anything from the Avs, as often happens with other teams in other venues.  Well, yes I did.... I got a bandage and a Tylenol.  Fortunately, someone a couple of rows behind me caught the puck and gave it to me as a souvenir.  Who would have guessed that going to a hockey game would be a low point in the year?

Here's hoping that 2016 will be full of fun and adventure for me and my friends and family.  I'm hoping for lots of good knitting, travel and live music.
2 comments:
Labels: Hockey, Knitting Events, Life, Travel 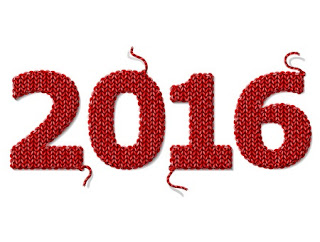