After the DFW Fiber Fest I stayed on in the Dallas area to do some sightseeing.  There were two places in particular that I wanted to visit.  One was the site of the President Kennedy assassination and the other was Southfork Ranch from the TV series, Dallas.

The JFK assassination was one of those events that you remember where you were when it happened.  (The bombing of the twin towers in NYC was another, as was the death of Elvis.)

I was 14 at the time and had watched the events on black and white TV.  It had been a day of exams (9th grade) and I learned about it when I was leaving school.  This was the first big news event that I remember and I was very affected by it.  It was the only thing on TV and it was hard for me to believe that something like this could happen.  That same feeling overcame me when Robert Kennedy and Martin Luther King, Jr. were killed.  The question was "WHY"?

Being in Dallas all these years later I had to see the location for myself, making it all the more real.  The atmosphere was not at all solemn, as I thought it might be.  There were lots of tourists and many teenagers obviously on a class trip. It seemed almost festive, which bothered me, but to be fair to them....it was much before their time and they had a day off school.  There were street vendors selling souvenir newspapers and little groups of people stopping to listen to someone describing their take on the events (conspiracy?  no conspiracy?).

Dealey Plaza, the "grassy knoll" was were people had gathered back in 1963 to watch the motorcade drive by.

In this picture of the grassy knoll, facing in the opposite direction, you can see the Texas School Book Depository, on the right, where Lee Harvey Oswald fired the shots. 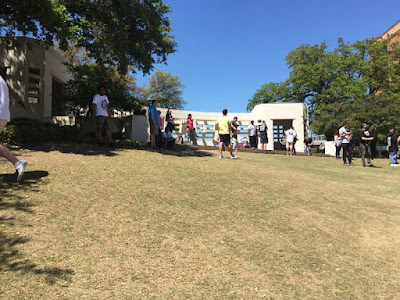 The shots were fired from the sixth floor.  There is a white object in the window to show where the shooter was located.  It was an eerie, sick feeling to know that a man stood there and fired at and killed the President. 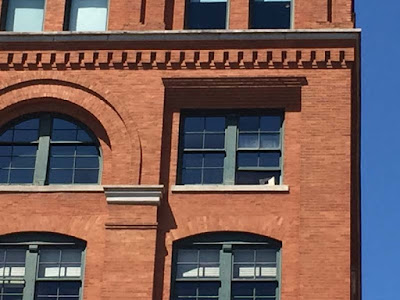 This sign is just around the corner from the building.  By the way, you can see that it was a beautiful day.  The sun was shining and it was 81 F. 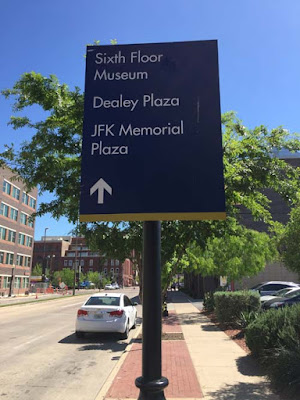 The next day, and on a happier note, I drove out to Parker, Texas to visit Southfork Ranch, home of the fictional TV family, The Ewings.  Dallas was one show in which I've seen every episode.  My Mom was a big fan, too, and we would often discuss the shenanigans of JR! 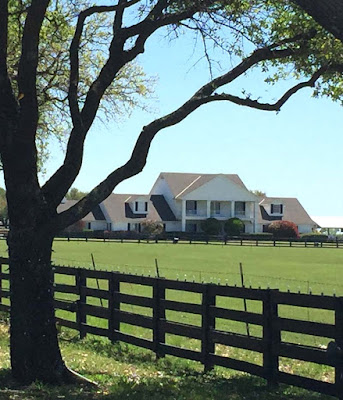 The exterior of the house looks exactly as what you saw in the show and you'd almost expect to see Bobby Ewing driving down the long driveway in his red convertible.


Next to the house, what you never saw on the TV show, is the large gift shop and an event center.  This picture of the family was hanging on the wall of the gift shop.


The next day I flew home.  With the sightseeing and the Fiber Fest, it was a very good visit to the Dallas area. 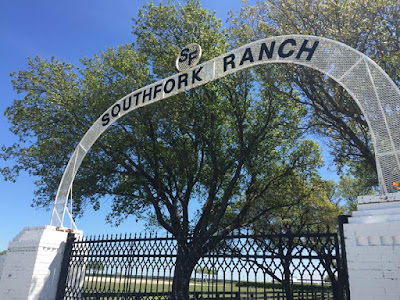 Has it really been two weeks since I was in Dallas?  How time flies.  The DFW Fiber Fest was a lot of fun and it felt great to get back into teaching knitting again. I taught a class in Intarsia, one of my favorite techniques.  I'm looking forward to teaching more in the future.

The Fiber Fest was actually in Irving, just a short distance from Dallas.  As a matter of fact, you could see the Dallas skyline from the Convention Center.  It was quite warm (81°F/27°C), warmer than I'm used to in April and I loved seeing the flowers, especially the Blue Bonnets along many of the roadsides. 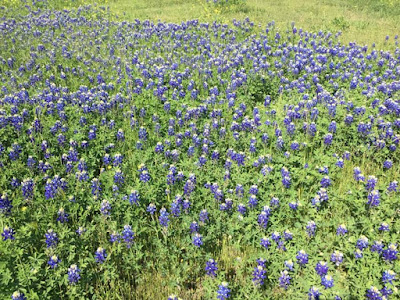 The Market was excellent - so many vendors that I'd never heard of before, many of them indy dyers.

I have a Travel Afghan and I make new block with a yarn that will represent the trip to me.

I was torn between two skeins from two different vendors.  One was by Must Stash from San Antonio, TX.  This yarn was red, white and blue as in the US and the Texas state flags.  It also had the DFW Fiber Fest logo on the label.  The color is:  "Elevens - 2016 Fiber Fest".  Eleven refers to the fact that this is the 11th year of the Fiber Fest.

It would have been perfect but for one thing.  Despite how the colors look in the picture, they are actually much lighter.  I found it impossible to take a picture that represent the colors accurately.

The blue, in particular, was off.  It was more of a medium sky blue, or medium baby blue, rather than the rich blue you see on the flag.

The red was also a little on the light side but not off as much as the blue.  If I hadn't found another suitable yarn, I would have used this one.  Instead, I'll make a pair of socks with the skein.

At first glance I thought it was cotton, but it's 75% merino and 25% nylon and will produce 6 uneven stripes when knitted.

The other yarn that I found was dyed just for the Fiber Fest by Knitting Rose Yarns out of Keller, TX, near Fort Worth.

The color is "Texas Wildflowers".  It made a nice addition to my Travel Afghan, hex #10.  I like the way the colors pop on the background of green.  The yarn is 80% Superwash Merino Wool, 10% Cashmere, 10% Nylon.  There might be enough remaining for socks, although I might have to do the heels and/or toes in a complementary color. 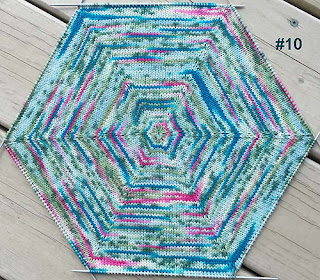 Another yarn was calling my name.  I don't buy much green so this was slightly outside of the norm for me, but the greens were so lovely and the gradients moved perfectly from one skein to another. This is from Miss Babs, who wasn't at the market this year.  Her yarn was being sold by the folks in the Signature Needles booth.  This color set is called "Draco".  It's 100% Superwash Merino Wool, 133 yards per mini-skein, 6 shades.  I don't know what I'll make yet but I'm thinking about a yoke pullover.  That's subject to change, of course!

I managed to resist the MadelineTosh yarns, even though I like it lot.  There were so many beautiful options that I would have had a had time picking just one, anyway.  Besides, I'm currently using it as the background for my Talavera Dreams afghan.  The booth was large and the funny thing is that every one of the sales ladies (at least 3 or 4) claimed that her name was Madeline.  Of course, I believe them! 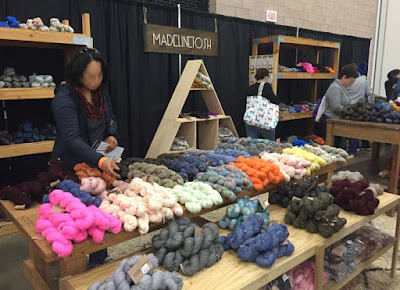 There was an key note speaker at the gathering on Friday night, Sivia Harding.  I've met Sivia a few times and did some test knitting for her a couple of years ago.  Her talk, "Mending Through The Ages" was enlightening.  I didn't know that there was so much more to the topic than fixing a hole in a sock. 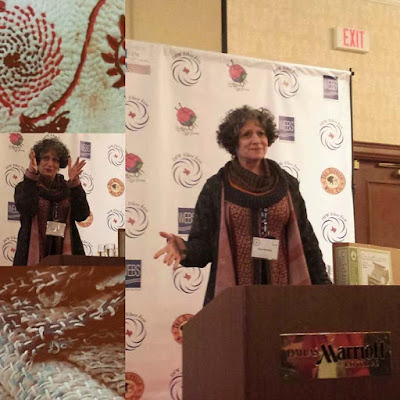 I was a student at the Fiber Fest too, taking a class in photographing fibers from one of the Shibaguys.  Good class.

The weekend went by much too quickly, but since I'd never been to Dallas before (I don't count changing planes at the airport on an earlier trip) I stayed on for a couple of days to do some sightseeing.  More on that next time.
No comments:
Labels: Finished 2016, Knitting Events, Teaching, Travel 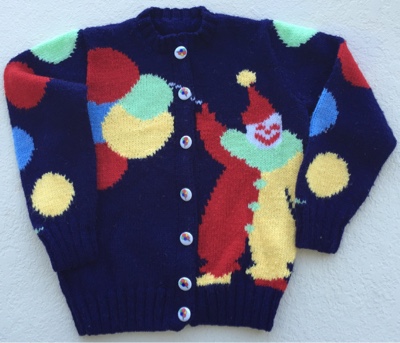 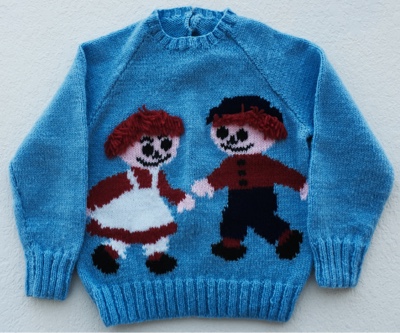 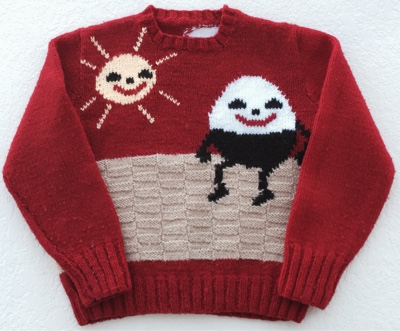 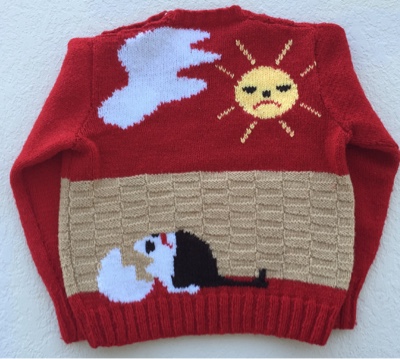 Now, here it is,three decades later and I'm in Irving, Texas, and yesterday I taught a class at the DFW Fiber Fest and totally enjoyed myself.  I hope to do more teaching in the not-too-distant future.
2 comments:
Labels: Sweaters
Newer Posts Older Posts Home
Subscribe to: Posts (Atom)