I took a class in Shetland on the subject of Mood Boards and Color, and I was asked by a good friend to talk more about it.  I'm happy to do it, B.  This definition, found on Google, fits the class that I took:


A moodboard (sometimes called inspiration boards) is a type of poster design that may consist of images, text, and samples of objects in a composition of the choice of the moodboard creator. Designers and others use moodboards to develop their design concepts and to communicate to other members of the design team.

The first thing is to find your inspiration.  It can be something in nature, architecture, food, an advertisement, anything that speaks to you.  In class we went through magazines to find a picture that we particularly liked.  I chose a picture of berries that had been sprinkled with sugar in a pewter dish that was accented with a piece of fabric in a similar color.  All of this was on a black background. I liked that the colors were close in shade as it gave a sense of drama and richness. 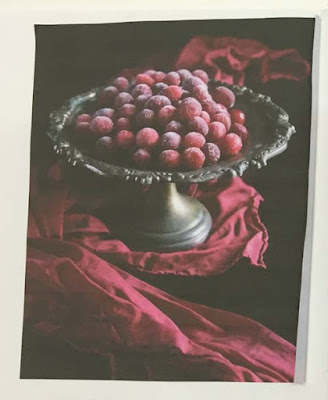 Our next task was to identify all the colors we saw in the picture.  There really are more than you realize when you first look.  For example, on the rim of the dish there is a small spot of blue.  The dish is not just gray, but actually several shades, leaning towards off white in places.  And the berries...how many different colors of red/pink are there?  Same with the fabric.  The idea is to train your eye to see all the colors.  There were actually a couple more than you see in this picture: sand and mermaid.

At Joanna Hunter's (the instructor, a designer and owner of the Ninian store) request, Jamieson's gave her a ball of every color that they carry, which Joanna spread out on the floor for all to see well.

We looked for colors that matched those in our picture and wrapped them around a piece of cardstock.  You can also use colored pencils, paint, markers, whatever matches your colors.  I wrote down the name of each color so that I could locate it again later - spelling doesn't count, if you see the error!

From these many colors we chose five or six (or however many we thought we'd like to use in our knitting) that we particularly liked and that we thought we go together well.  We kept in mind the intensity of each color, which color we'd like to use the most and which ones would be best seen as a pop of color. After holding them together to assess them, changing some, adding others, we put them onto a little shade card.  I liked these colors together.  The second color, below, is Port Wine.  I mislabelled it and I blame it on the fact that it was near the end of the class and I wasn't paying enough attention to detail. 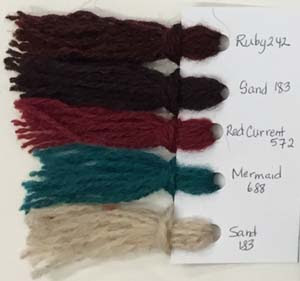 Joanna took our colors and matched them as closely as she was able into a computer program that had a design loaded already.  A number of variations were tried:  different backgrounds, where to put the "pop" color, etc. Ideally, we would then take the chart and knit a swatch, or several swatches, before making the final decision for our project, especially since the colors from the computer weren't an exact yarn match. 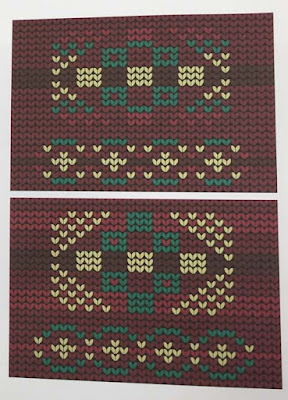 The process is time-consuming.  This took several hours, but it was constructive, especially if you're working commercially as Joanna is.  In the long run, it would save time and money.  I enjoyed looking through her book of moodboards and then seeing the finished garments in her shop.  It was like watching the creative process come alive.

It's one thing to tell you about the class.  This gives you some idea of one process for creating a moodboard, but there is nothing like actually taking a class and having the teacher guide you on each step.  I learned a lot from Joanna and seeing the moodboards made by others in the class was also inspiring.  I was distracted during the class from time to time, admiring the walls of yarn.  This is only some of it.  There is much more! 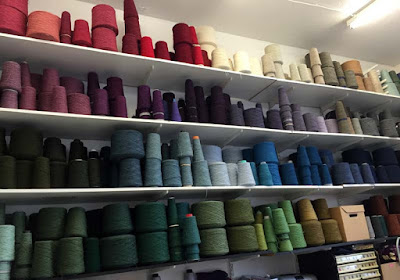 If you're ever in Shetland and this class is offered, I highly recommend it.
Labels: Classes, Travel

The whole idea is fascinating! What a wonderful learning experience you had. Thanks for sharing.