I hope that it's been a good 4th if you're celebrating.  I had planned to wear, what I thought, was a pair of socks in the colors of the US (or Texas) flag.  However, when I opened up the skein it was obvious that the colors were not true.  They were more of a pink/red and a medium baby blue....and not quite as bright as they appear in the picture below.  It didn't look bad when it was all wrapped in a skein, but spreading out the yarn and winding it into a ball proved that the yarn was not the rich red, white and blue that I'd hoped it would be.  The colors are fine, just not the patriotic ones that I was going for.  However, another project is now finished.  I'm working through my fabulous collection of sock yarns.  So much fun, and such variety. 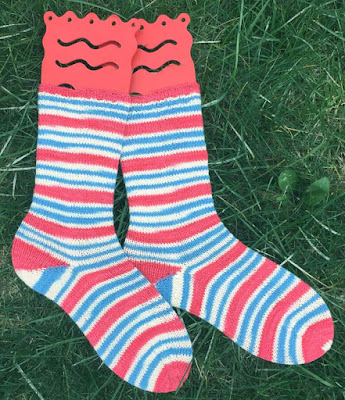 Yarn: Perfect Sock - Self striping from Must Stash Yarns
75% Superwash Merino / 25% Nylon
6 Uneven Stripes
Color: Elevens - 2016 Fiber Fest
This yarn was a Dallas/Fort Worth Fiber Fest exclusive.
Elevens refers to the fact that this year was the 11th Anniversary of the event.

Notes:  This yarn doesn't have the twist that you often find in sock yarns, but the yarn is strong.  I normally break a yarn with my hands but I needed to use scissors for this.  Must Stash had gorgeous colorways in their booth.  I ended up with two skeins.  The other one is speckle dyed.
Labels: Finished 2016, Knitting Events, Socks, Travel