And here is the second Crofthoose Hat.  For the wool, this time, I moved over to Jamieson's, the other wool company in the Shetlands.  Even though the names are close, Jamieson & Smith and Jamieson's are not the same company.  It's a coincidence that they are so similar, and I'm sure that it confusing to some.  I was for me for quite a while.  I'm just thrilled that there are two companies with wool that is interchangeable - so many color choices.

The hat is being modelled, this time, by my daughter, Jessica, and my 10-month-old granddaughter, Alyssa. Yarn:  All Jamieson's Shetland Spindrift.  Someone on Ravelry knit the hat in a colorway that appealed to me, so I copied her choices, except for one.  She had a very bright Fuschia in the mix and I changed to a slightly more subtle Ginger.  I stuck to using five colors as in the pattern. 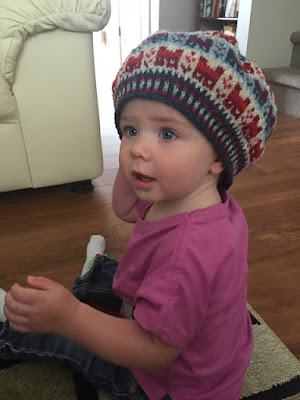