We're here!  We're here!  After 3 flights, starting at 6:35 on Wednesday night, I've finally made it to Shetland and it feels so good to be back here.

Our driver, John, picked us up at the airport and we did some visiting and sightseeing before even checking into the hotel. We drove around the countryside and you can see by the picture just how beautiful this place is - and this is just one picture. 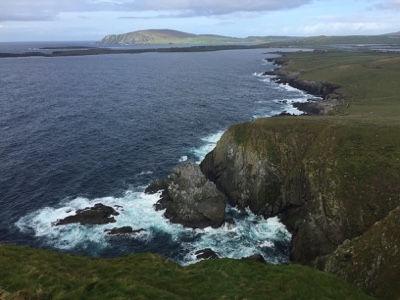 Than we went on to Sumburgh lighthouse and looked out over the sea.  It was windy and the water was choppy. 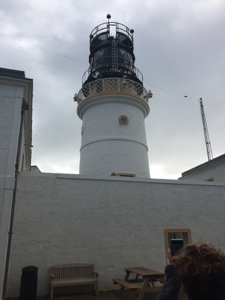 From there we were driving down the road and we saw a sign advertising a studio with traditional Shetland knitwear called Shetland Collection. Of course we had to stop, turn around and head down the side road. There we met Doreen Brown and her hubby who were incredibly friendly and welcoming. She showed us the beautful designs in her shop and then took us to her studio.  There she demonstrated how she designs and makes some of the sweaters, her hubby weaves in all the ends. I was very taken with a non-traditional Shetland cardigan (below, left) called Tapestry . I didn't buy it....yet, but if I'm still tempted later in the week it might have to come home with me. 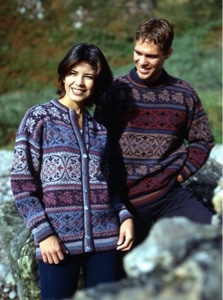 Doreen had a lovely wood cabinet with shallow drawers.  In each drawer was a selection of her swatches, each drawer sorted by color. They were inspirational and they were definitely not like the  curled bits of necessity that I make before casting on for a sweater.

The best yet was learning that Doreen was a celebrity. There is a very popular and well-known photo  in Shetland that shows up mostly on postcards.  The picture depicts a pair of Shetland ponies outfitted in Shetland sweaters.  Doreen designed and knit the sweaters. 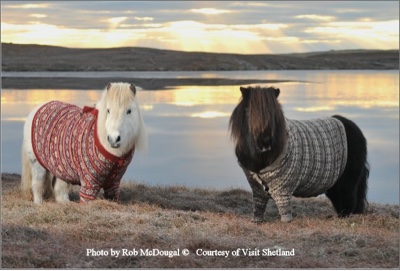 Doreen and her husband were given the opportunity to take the sweaters to New York City and dress a pair of Shetland ponies there and they were on Good Morning America while there.

We stopped at a couple of shops outside of Lerwick, in Hoswick:  Laurence Odie Knitwear (our driver's brother's company) and the Nielanell store. Then...we went to hotel to check in.  After dinner we met three knitters from Saskatchewan. All in all, it was a good start.  Tomorrow we check in to Wool Week and may visit the Sheila McGregor display.  It's on all week.
Labels: Travel


Hello Ladies----- I am soooo enjoying your blog Joanne which will of course also lead to lots of IDEAS thank you. The photo you posted with Shetland Ponies in Sweaters----we have used it for many of our itineraries and also in our brochure :-) Delighted that we can communicate this way.... Take Care Happy KNITTING :-) Jean