I've just finished watching Lerwick, Shetland's Up Helly Aa procession online and it was amazing.  I would have loved to have been there in person.  Here are a few pictures captured from the screen. You can click on any picture to enlarge it. 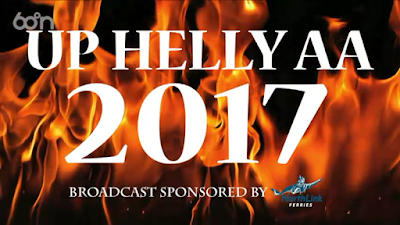 For those of us who couldn't be in Shetland, it was great that it was streamed live online. 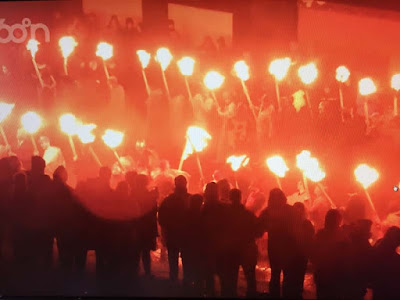 The marchers are gathering, preparing for the procession. 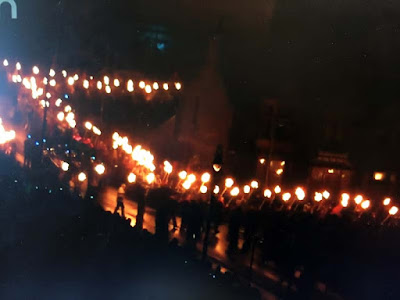 The procession.  There are around 1000 marchers, almost 900 of them are carrying torches. 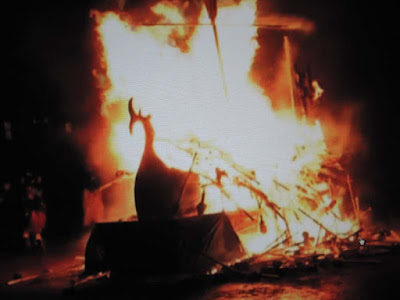 The torches are thrown onto the Viking galley. 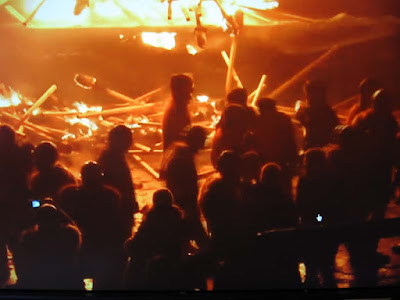 The galley is burning.  A new one will be made for next year. 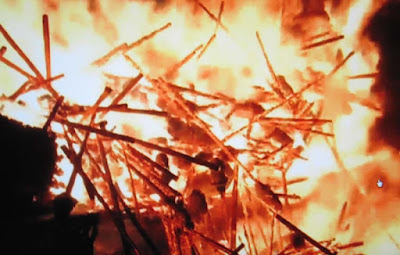 The parade ends when the ship's mast is down.
No comments:
Labels: Good Things, Life

Have you ever been to Shetland?  Yes?  No?  Would you like to go tomorrow, Tuesday, January 31st?  The cost is free - no airfare, no hotel cost.

The annual Fire Festival, "Up Helly Aa" is going to be streamed online and I, for one, will be watching.  There are various activities during the day with the highlight being the parade and the burning of the Viking galley at night.  It all starts at 7:00 pm, Shetland time.  For me, in mountain time, that's noon.

I'm taking some vacation time in order to watch.  While watching, I'll be knitting my Fire Festival knitalong project, the hot water bottle cover:
There is lots of good background information - here.

To watch the festivities online, the link is here.  It's brought to you by 60N magazine on Channel 3.

Get out your knitting and your Viking garb and have fun!

RIP Butch Trucks, one of the drummers in the Allman Brothers Band.


If you don't recognize the musicians, that's Butch wearing the blue Moogis t-shirt.  His nephew, Derek, in the plaid shirt, is playing slide guitar.  So much talent in one family, and there are other family members who are also musicians.

I was fortunate enough to see the Allman Brothers Band twice:  first in Columbia, Maryland in 2012 and then in Charlotte, North Carolina in 2013.  Both shows were fabulous.  I wish I could have been to more shows before they disbanded in 2014, but, thankfully, the music lives on.  Watch the video in full screen, turn up the volume, and enjoy.
No comments:
Labels: Life, Music

I still haven't blogged about all my finished projects from 2016 and there is one from 2015, but I thought I'd start the year off on the right foot, so to speak.

Last year the yarn store, The Loopy Ewe, offered an exclusive sock yarn colorway each month along with a matching notecard.  The yarn was dyed by Blue Moon Fiber Arts, the Socks That Rock people.  The cards were based on photographs by Image Words of Fort Collins.  The picture this month is called Frosty Ridge.  The colors are beautiful and I collected the colors of all 12 months, as did my friend, S.

I've decided to make socks every month and would look for a texture pattern that would break up any potential pooling of the colors.  For January I chose the Herringbone Rib pattern for the leg and on top of the foot, worked over 60 stitches:

I was happy with the results and would use this pattern on another pair of socks.  However, for this knitalong, I'd like to try out a different textured pattern each month. 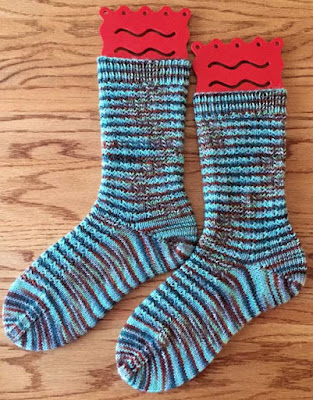 Note:  I had quite a bit of yarn remaining so I've decided to make another pair of socks, Bonus Socks.  I started with working the cuff of each sock with the January yarn.  Each month I'll add a stripe with the remaining yarn until, at the end of the year, I'll have a pair of crazy striped socks.


The name for next month's color is Bebop.  It's bright and colorful and I'm looking forward to knitting with it.  Now, to find a good pool-busting pattern to use and then wait patiently for the Feburary 1st cast on.
No comments:
Labels: Finished 2017, Socks, Socks-Pairs Made 2017

Last year a good friend and fabulous knitter passed away.  Shortly afterwards some of the knitting buddies were asked if we'd help to sort out her knitting room.  We were sad, but happy to be of help.  A knitting project, still on the needles was this fair isle project, likely a design by Alice Starmore, as some of our group had participated in a Starmore knitalong.

We didn't know what to do with this beautiful piece of knitting and we didn't want to throw it out.  I had traveled to Shetland in September 2015 with another friend, P., and had learned about Burra Bears.  Wendy Inkster, the owner of the Burra Bears Studio, takes knitted pieces and repurposes them.  Some are old, loved, sweaters that are no longer worn, for example.  P. suggested that we contact Wendy to see if there was enough fabric to create a bear.  Fortunately, there was enough for a small one.

The knitted piece was mailed off to Wendy with the promise that we'd pick it up when we traveled back to Shetland for Wool Week in September, 2016.  The drive from Lerwick to Burra is beautiful and we had the added anticipation of seeing how the little bear turned out.  We were warmly greeted by Wendy and she showed us her workroom.  It's a gorgeous location, attached to her house, where she can look out at the water and fields through the window. 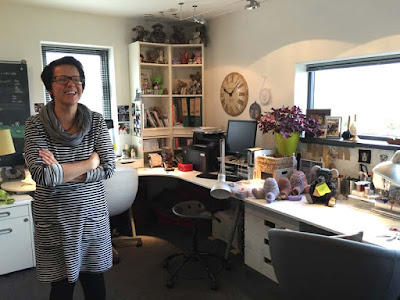 Aside from the custom orders, Wendy finds old sweaters in charity shops and also has some lengths of fairisle fabric knitted up.  The one, below, is in traditional Shetland colors and patterns.  Burra Bears can be found in some of the shops in Shetland, and I saw one in the gift shop on the ferry from Aberdeen to Lerwick. 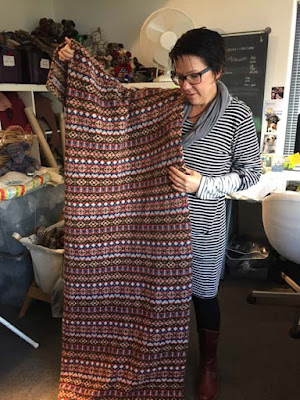 When we saw the bear, it was love at first sight.  Wendy had done such a wonderful job with the bit of knitting that we'd sent.  The little bear was so cute!  We were asked if we'd like to give the bear a name.  Our friend had an expression when she saw one of our projects and she particularly liked it.  She would say, "Isn't that preshie" (precious)!  So, the bear now has a name, Preshie. 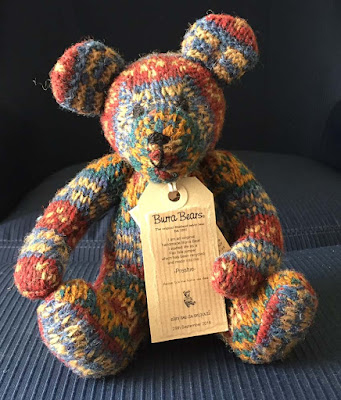 A month later, Preshie was in her little carry bag (with a mesh front so that she could breathe) and the knitters met our friend's hubby for dinner and we gave the bear to him as a remembrance.  He loved it. 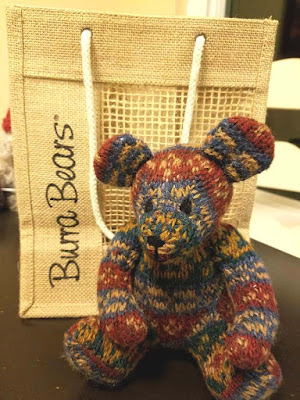 If you have a wool sweater and you want to preserve it for whatever reason, or if you just want a Burra Bear, I suggest that you contact Burra Bears.  I can't say enough good things about Wendy and her company.
No comments:
Labels: Life, Toys, Travel 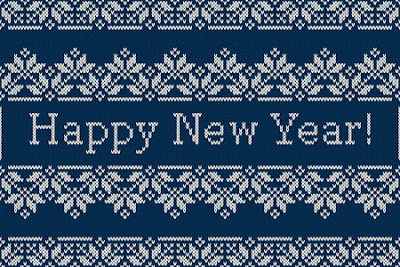 I hope that 2017 will be a good year for you.  At this time of year I find myself looking back as well as forward.  There were some bad/sad things:  2 surgeries and other health issues - but compared to what a lot of people are going through, they were minor, but they were mine, and there were deaths of 2 people I knew for years.

On the positive side of things I went on a marvelous trip to Shetland Wool Week and time in London, including the Knitting & Stitching Show.  I'm grateful that my daughter and her family live close by and we get together from time time.  And...I went to Denver to hang out with my buddies - and also saw the Trans-Siberian Orchestra concert, something I've wanted to do for a few years.

I wonder what is ahead in the coming year.  Hopefully some good things.  I'm excited about a 3-day workshop on Fair Isle knitting with Janine Bajus in Berkeley, CA.  She is the author of the excellent book, Joy of Color.  I am seriously enamored of fair isle knitting and can't seem to get enough. You can read more about Janine's book here.

Later that same month I've decided to check out the Vogue Knitting Live event in Las Vegas.  Las Vegas is an easy trip from Calgary and it was too good to pass up.  The classes and vendors haven't been announced yet, but the venue looks amazing.  As on many trips I'm looking forward to knitting with new people, learning from them and enjoying their company.

And, of course, no year would be complete without a trip to Denver.  I'll be heading south in June, timing the trip to coincide with the Estes Park Wool Festival.  I haven't been there in a number of years and it's time for a return.  You can't ask for a prettier location up in the Rockies.  Besides, I always run into many people that I know and it's fun to catch up. 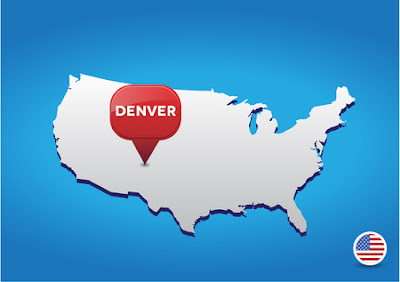 Knitting-wise, there is the usual "I must finish my projects and knit from my stash".  We'll see how that goes!

I wish you all a very Happy 2017.  May it be your best year yet.
No comments:
Labels: Knitting Events, Life
Newer Posts Older Posts Home
Subscribe to: Posts (Atom)