It Started With A Sweater

I've been drawn to Shetland and Fair Isle for many, many years....even decades.  I still remember my first Shetland sweater as it was a favorite.  It was a plain cardigan in a nice shade of yellow.  I was 15.  At that time, Shetland was just a word to describe a certain type of wool for a sweater.  I don't know if I even realized that it was place then.  I probably didn't think about it one way or the other.

I don't remember a time when I didn't knit, and over the years my knitting included more and more colorwork:  lots of intarsia in the 80s when I was knitting children's sweaters, and then I discovered Kaffe Fassett,  Jean Moss, other Rowan designers, Rowan yarns, and Alice Starmore.  It was a thrill to meet her in the fall of 2015.  I knitted her Marina pattern as a pullover and it still looks new today even though it's been about 25 years since I made it.

Sometime in the 90s I bought a Croft.  Okay, it's a miniature of a Croft, 2-inches tall to the top of the chimneys, made by Lilliput Lane. 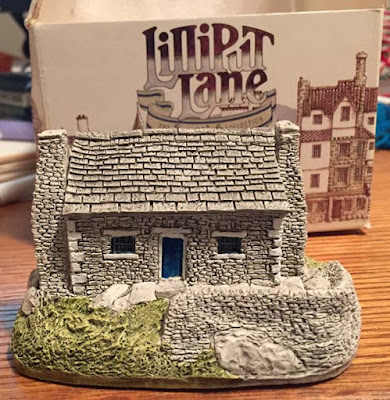 I now knew about the Shetland Islands, but mostly I knew that I liked this little house and the fact that there were sheep in the back: 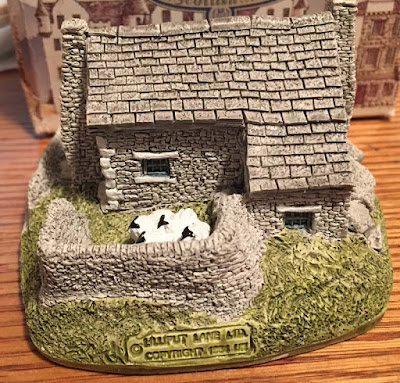 Then, sometime in the early 2000s I dropped into the gift shop at University of Colorado Hospital and saw this and had to take this cute sheep in the fair isle sweater home with me: 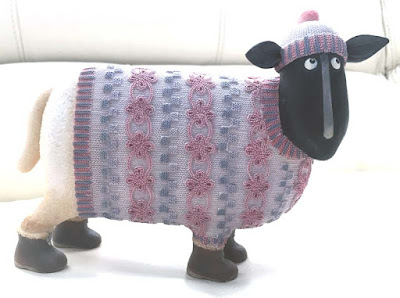 By this time I knew about the Shetland Isles but never dreamed that I'd go there, not once, but twice. I've always liked fairisle knitting, but it's been my main focus and interest since visiting.  There is nothing like being in Shetland where textiles are a way of life - visiting the museums, Jamieson's, Jamieson & Smith, and meeting some of the local people, including knitters and designers.

Another story that I smile about now:  in about 1990 or 1991 I went to a computer show.  Home computers were pretty new and I knew very little about them, and nothing about the world wide web.  I was talking to one of the exhibitors and he said that you could "visit" other countries and companies.  I found this fascinating and rather hard to believe.  He offered to show me and said that I should name a company or place and he would see if they had a website.  I asked for Jamieson & Smith, and he found it.   J&S was the first place I saw on the web.

And now, I'm building on my interest (some might call it an obsession).  More in the next blog post.
Labels: Life