Jamieson & Smith are hosting a knitalong, the Fire Festival KAL, and I couldn't resist joining.

Here are the parameters: 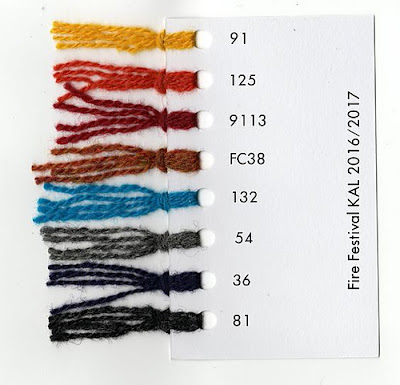 I've been following the posts on the Ravelry group and the pictures of finished projects are coming in almost daily.  It's amazing what everyone has come up with:  hats, scarves, sweaters....and more.

For my project, I decided to make a cover for my hot water bottle.  To me, there was a sense of symmetry between the Up Helly Aa/Fire Festival event and a hot water bottle - a merging of theme and purpose.

I was going to try to come up with something totally original, but I had come across various patterns that I could combine for mine - and all were free.  There was no need to reinvent the wheel, so to speak.  For the hot water bottle cover I used the Three Seasons in Scotland (Ravelry link) by Hanna Weibye as my template.  The flames were from a pair of socks, Hot Rod Socks and the Viking ship is a graph that I found on the Tricksy Knitter site.

When I put them all together and created a pattern in Excel, I ended up with this: 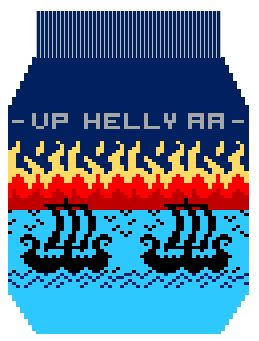 I decided to add the words -- UP HELLY AA -- in gray, the color of smoke.  I had planned to use 7 of the 8 colors in the version you see, above.  Since then, I've decided to add some fish in the water at the bottom with color #8.  The back and front are the same.

The cover is knitted from the top down and, as of today, I have the top half of the ships knitted so I'm getting close to finishing.  My ships have sails!  I'm really enjoying this.  It's so different than anything I've made before.  Shortly, I'll be back with pictures of the FO (finished object). 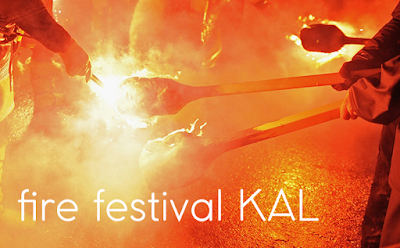 Labels: Knitting for the Home