Last year a good friend passed away and her husband wanted her knitting friends to have her yarn.  She had lots of beautiful yarns including The Plucky Knitter in various shades and bases.  I decided that I would make a sweater.

Stripes was the most logical choice as there were a number of single skeins.  I have some Plucky Yarn in my stash, but I preferred to use only hers for this project if I could.  I started this top-down design, A Mermaid Darkly by Yelena M. Dasher (Ravelry link). 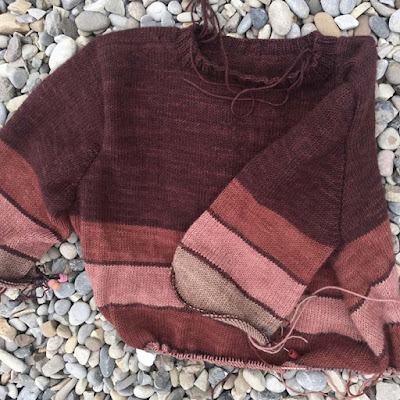 I had planned to use at least 6 or 7 colors, starting with Rye - then going lighter with Noisette and then Brulée, then to Breakfast Blend and followed by moss green and the darker rye.  I started knitting but didn't like the direction these colors were taking me, so I ripped out the moss green, going back to where the Breakfast Blend ended on the body.  Then, I wasn't sure if the tan was working, so I ripped out the stripe on the body and knitting another Noisette stripe.  My plan was to knit it, then another Brulée, another Noisette and finish with new Rye.

At the moment I just can't make up my mind, which is frustrating, as I'm anxious to finish and wear this sweater.  Will I rip out the last stripe on each of the sleeves? Or, will I ripped out the bottom color on the body, than choose the one already chosen on the sleeves.

I guess I should just make up my mind and go for it.  It's not like I'm trying to create something to be hung in the Louvre.  Whatever I finally decide on, I'm sure it'll okay.  It's a sweater, for heaven's sake!

And.....if you're celebrating Mother's Day, have a good day tomorrow.