It's hard to believe that December is here now and that Christmas is only a few weeks away.  It sneaks up on me every year without fail.  Who doesn't love an Advent countdown to the 25th?  How many of you have a chocolate Advent calendar that you're starting today?

River City Yarns in Edmonton, Alberta produced an Advent Box for knitters.  What a great idea.  They sold out very quickly.  I picked mine up when I was in Edmonton for the Roger Waters concert.  More on that in another post.

Today I took the box off the shelf and removed the brown paper wrapped around it to see this festive box:

I realized when I took the picture that the box is actually upside down, but the top looks the same, so I didn't take a second photo.  I cut the tape and opened the box to see this inside: 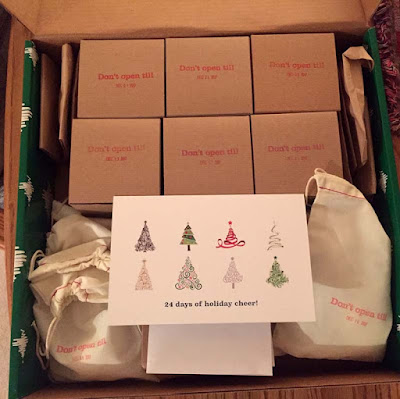 There is card with an introduction to the Advent Box, also little boxes, paper bags and cloth drawstring bags.  Each has been stamped with "Don't open till .... and the date".  The elves at River City have hand picked and hand packed each day's gift.

The theme this year is "O Tannenbaum", from a German folk song.  Loving Germany as I do, I'm now even more eager to see what inside each day and see if it ties in with the theme.

So, today, I can open the first box.  Ta-dahhhh!!   Wow....this is cool and what a great way to start the month.  Inside were 3 mini skeins of their exclusive sock yarn called Hat Trick as well as a pattern to make Mini Stockings.  These will make adorable ornaments for the tree, even if they don't represent my team, the Colorado Avalanche.  It's hockey, it's knitting, it's all good and I'm really liking the first gift.  Which reminds, me.  I have a large skein in the Avalanche colorway in my stash.  After I make myself a pair of socks, or whatever, I can make an additional Mini Stocking later on. 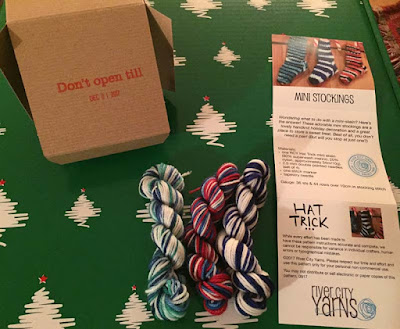 I don't know if everyone gets the same hockey teams represented by the minis.  I think that mine are, from left to right:  Vancouver Canucks, Montreal Canadiens and the Toronto Maple Leafs.

I wonder what's coming for December 2nd.  Check back again if you'd like to know, too.
Labels: Christmas, Hockey, Yarn Stores

Really, really good to have you back!