The surprise in the Advent Box today is a very pretty knitting progress keeper.  It from Red Door Designer Gems.  I don't believe they have a website, at least I couldn't find one.  This marks the halfway point for the Advent Box.  I'm curious about what I'm going to find next time. 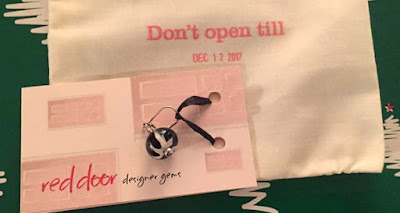 Have you ever worked on a project that makes you wonder if you even know how to knit?  I've run into just such a project.

When I saw the Santa Pillow on Ravelry I knew right away that I had to make it.  I liked the clean design and the clever way that the beards and the hats mirrored each other.  It seemed like straightforward stranded knitting, a technique I enjoy.

The knitting gods had other ideas and this project started kicking my butt:

2.  I cast on the 216 stitches and joined the knitting to work in the round, taking care not to twist the stitches.  I worked all across the round, doing the 12 stitch repeats.  But...when I got to the end of the round I had one stitch left over.  The repeat for the first round is 11 red, 1 white stitch.  It turns out that I can't count to 11.  In the third of the 18 repeats, I had done 10 red, 1 white.  Since it was the first round I just ripped out the entire piece and started again.

3.  I was now moving ahead, up to round 8, but I was bothered by the fact that, where I was catching the red stitches behind the white beard, they were showing.  I didn't like the little bits of red.  I hadn't put the catches all in the same place, so it looked like speckles over the beard.  The white stitches behind the red hat were fine.  Rip, rip, rip.  Start again.

3.  This time I didn't catch the stitches behind and had very long floats - over 11 stitches in some rounds.  This will probably be okay since the floats will be on the inside of a pillow cover and not in a sweater.  However, my stitches were not as even as I wanted and I can be kind of particular.  It was a case of somewhat slippery yarn and slippery metal Addi needles.  I didn't want to wait and see if blocking would improve the look.  Rip - start yet again.

4.  I ordered a set of wooden Dreamz needles and started again and they were working out very well.  My stitches were even, as I wanted, and the knitting was much more comfortable.  At the end of the 4th round I took a look at my piece and realized that I'd dropped a stitch earlier in the round...all the way to the cast on.  Oh no, rip again.

5.  I have the pillow on my needles again and I'm on round 3.  So far, so good.  I won't have this project done for Christmas this year.  I know that, but it's okay.  My new goal is to have it finished for Christmas 2018.  I'm okay with that.  I will have a finished pillow that I'm happy with, no matter how many times I have to reknit.  I really do know how to knit.  Really.  This project has just been a test of my patience and I will win!!
Labels: Christmas, Yarn Stores

Kind of particular? Really, what a surprise. And, I love the Santa pillow.