Maple Tea and A Finished Hat

Today's Advent Box surprise goes hand in hand with yesterday's silicone tea bag.  It's Maple Tea from River City Yarns.  How very unique and very Canadian.  The ingredients are:  black tea, brittle (sugar, hazelnut), maple syrup, flavour.  It sounds like it'll be sweet, which is fine by me.  One of the reasons I'll normally only have one cup a tea in a day is because I like it sweet.  I can't wait to try this Maple Tea.

I'm continuing to play catch-up with recording my finished projects - and they aren't all socks!  This time it's a hat that I made for my granddaughter, Alyssa, for her second birthday on October 15th.  I found a skein of amazing yarn called Abracadabra by HiKoo.  What's amazing about it is that it appears to be white when you are inside, but when you go outside in the sun the color changes to pink very quickly.

There was just enough yarn for the hat - about a yard left over.  I followed an excellent pattern called Whorl. It's well-written, a quick and easy pattern with just enough interest to keep it from being boring.  I expect that I'll make another Whorl hat someday.

The yarn is not terribly soft, feels rather plastic-y.  I expect that's down to the polypropylene content, but it's not unpleasant.  The yarn is now discontinued and I was glad that there was enough yarn for the hat and that I didn't run out.

To finish off the hat I added a furry pompom that came from The Loopy Ewe in Fort Collins, Colorado.  Alyssa loves anything soft and her hands went immediately to the pompom: 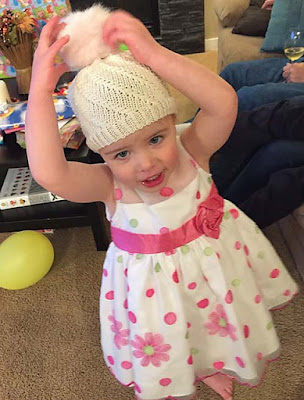 Later, out on the playground, her hat was pink:

The only difficulty I had was sewing on the pompom.  It very dense at the core and it was hard to get a needle through.  Next time, I'm looking for my thimble as I have another pompom for another hat (for me) yet to do.
Labels: Accessories, Christmas, Finished 2017, Knitting for Alyssa, Yarn Stores